YOU SAY YES, I SAY NO

I'm sure that my garden is host to many plans that others would say no to. But it works the other way too. Here are two plants I absolutely say no to.
The first is the Green milkweed vine, Matelea reticulata. "Oh, what a little beauty." I hear many say. 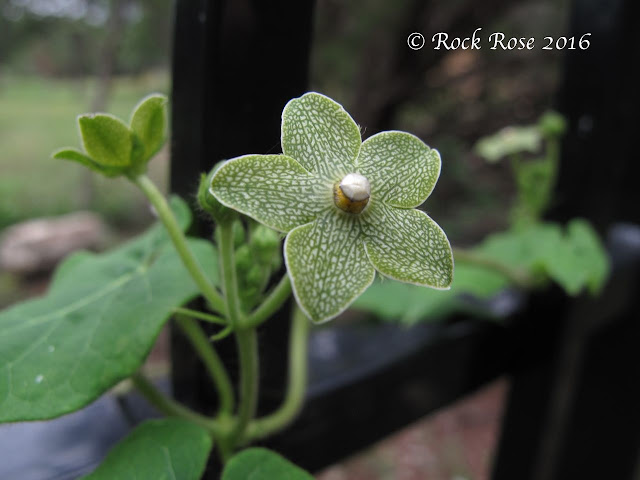 How could you not fall in love with such a sweet little flower with those attractive net-like veined petals and that single perfect pearl at its center. So adorable. And how often do you come across a green flower? 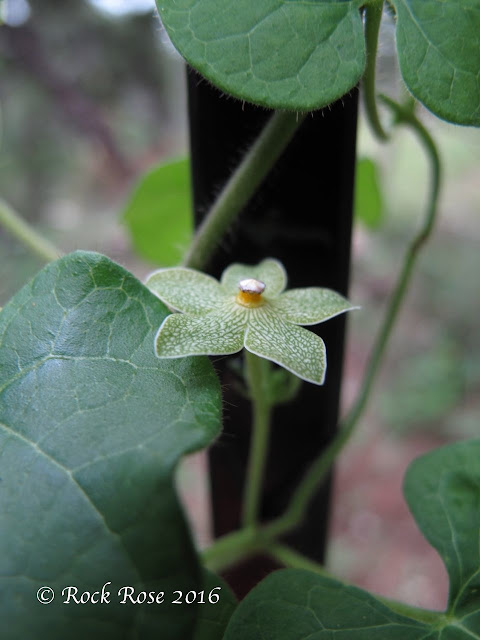 This plant showed up in my English garden a few years ago. Before I knew it it had taken a stranglehold on my Philippine Violet. My efforts to remove it have proved worthless and it appears every year. And yet I never hear anyone say anything bad about it. Just watch where you let it grow.
The plant appears in my Texas Wildflower book where it is described as having a hardy and robust nature and with the suggestion to place it where the leaves will not be disturbed because they have an obnoxious odor. I photographed this one on my neighbors wrought-iron fence, behind our septic field, where I can admire its beauty.
Being a member of the milkweed family it is generally thought that it is host to the Monarch butterfly caterpillar, but they are still waiting for evidence to support this theory.

As to my second 'no' say hello to the Asiatic dayflower, Commelina communis. There are probably a few heads nodding in agreement but even some who like this plant. It is actually a deeper blue than this photo shows. The flowers appear in the morning and close up by lunch time-and that's enough for it to make hundreds of seeds. 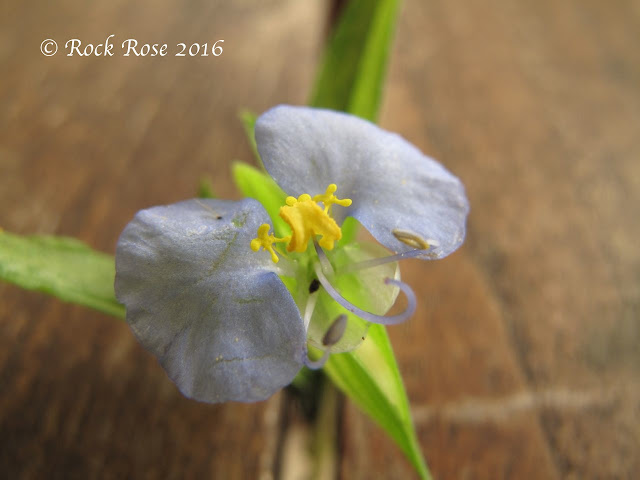 When it appeared in my garden a few years ago I was, at first, delighted. Then, when I noted its aggressive behavior I changed my mind. It's a devil to get rid of. Rather like nut sedge it has a rather bulbous root which is untouched by weedkillers. 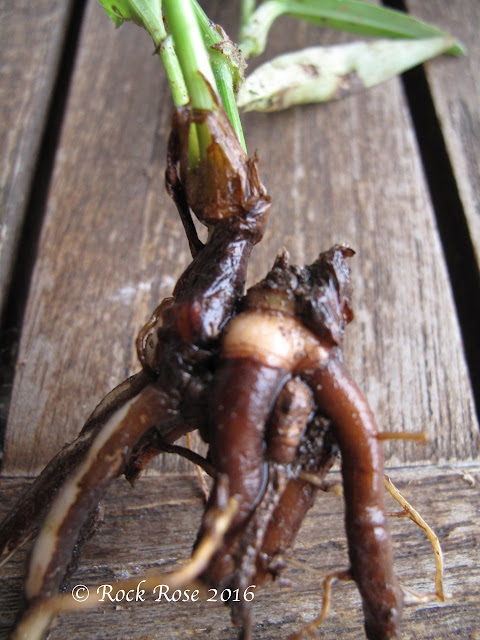 If you don't get the whole root out it will be back again tomorrow. Furthermore if you leave a nodule behind a new plant will spring up. It is an annual but produces thousands of seeds and like most 'weeds' many will lie dormant in the soil.
So this years war is on the dayflower. Last year it was with the nut sedge. That one is not over yet although I have it kerbed(curbed) its growth for now. It will be back I am sure.

The greatest garden show of the year, The Chelsea Flower Show, is over for another year. During the week we had the chance to see top garden designers as well as plant growers vie for medals that will likely secure their future in the garden world. For those of us who couldn't be there BBC did a wonderful job covering the whole show daily, inviting us into every one of those show gardens as well as the grand pavilion. We could never get that close if we were among the crowds. It was even  better than being there, although lacking the atmosphere.
So what of those show gardens? Do they really set the trends for the upcoming year or is it rather like the fashion runway-who actually wears those creations, anyway?
You can see the winning garden here. The Telegraph Garden, by Andy Sturgeon and all the winners here. The Winners.

It wasn't hard to spot a theme running through many of the gardens. There were plenty of rocks, no less than 85 large boulders transported into the showgrounds, and plenty of gravel with naturalistic plantings of grasses and native plants.There were dry stone walls, bubbling brooks, huge limestone boulders, a monster cube of granite with peepholes through which to view woodland gardens as well as walkways of honed limestone. Those gardens certainly appealed to me. Why wouldn't they? You know how much I love rock and naturalistic planting.

Of course it is also easy for me to like rocks because we have plenty of them and it was a given that we would use what we had. I have lived places where there were no rocks but you never miss what you have never had. I certainly would if I had to make a garden again and I didn't have those rocks on my doorstep. But we did bring in the Arizona sandstone slabs we added to the sunken garden. The area was originally decomposed granite but was quickly over run with plants and lost its character. Yes, we could have used some native limestone but our thinking was we needed something to offset the limestone boulders that surround the area. Plus they tie in to the pathways around the sunken garden. And they are so much lighter to work with than limestone. Not that weeding isn't still a chore.

We saved our own native flat rocks for walls and and patios floors.

There are places where the native rocks look good used as stepping stones. 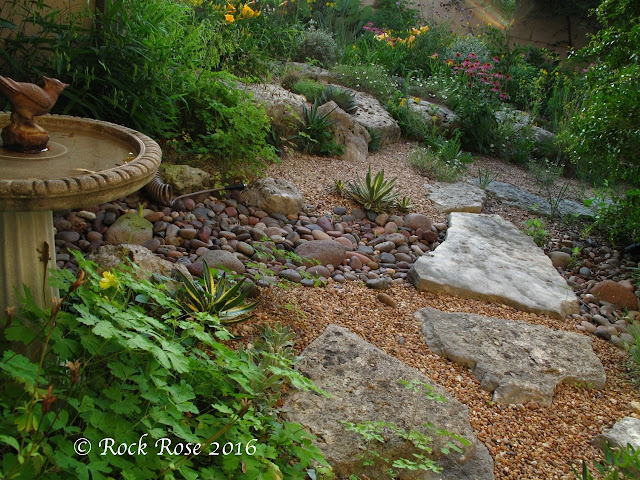 And there are places where man-made look better.


Here we used a large native stone to tie the patio to the threshold. 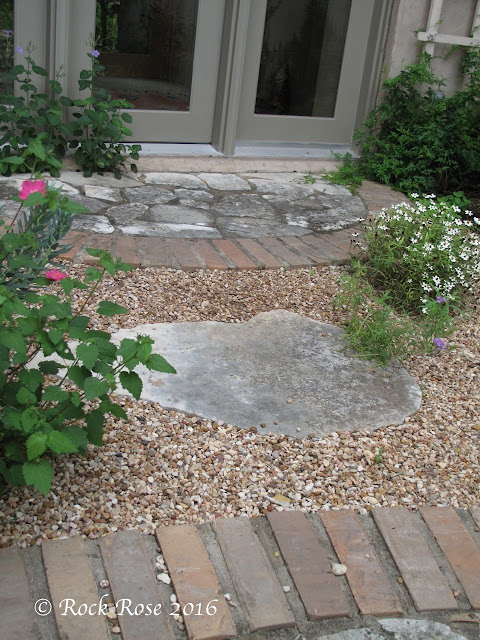 There are plenty of dry creeks although of late they have been very wet. 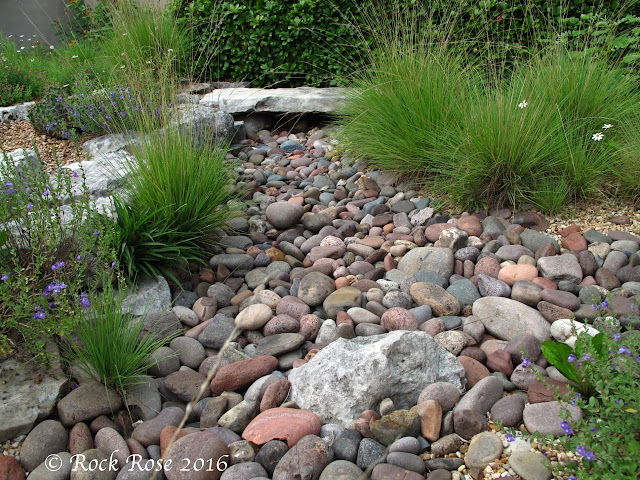 It's fun to think that my garden is in the fashion. But for how long, I wonder?

After the seemingly endless days of rain we were greeted by the sun this morning. We had breakfast outside in the English Garden. It was one of the reasons we decided to make a patio in this garden. Having watched the sun over our first year in the house we noticed that in the summer this area was shielded from the morning sun by the high wall. Perfect for breakfast on summer days. 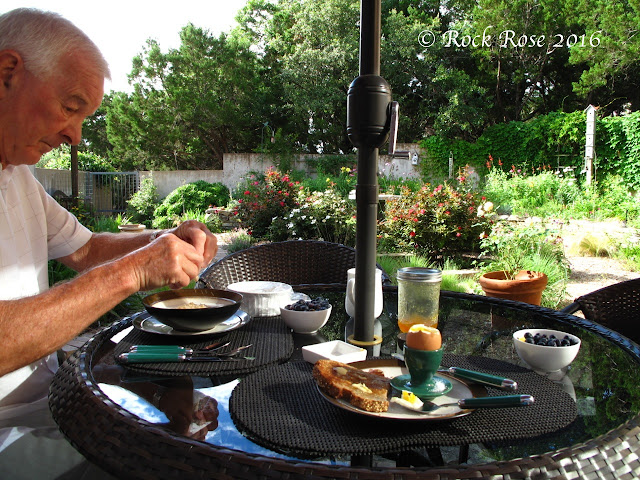 We both commented on the coolness of the air in the shade but knowing full well that it wouldn't last. It was going to be another hot and steamy one. The birds kept us longer at the breakfast table as we watched them enjoying the recent added bird feeders. And several hummingbirds were tolerating each other at the red salvia, cone flowers and verbena. They must be from the same family because they are normally very territorial. It would have been nice to linger but as always there was work to be done; so cutting back after all the rain and preparation for those days when there will be no rain. Irrigation is not my favorite chore but I have delayed too long this year.

I picked another few pounds of green beans. They have been prolific this year and I found myself actually getting round to pickling some the other day. 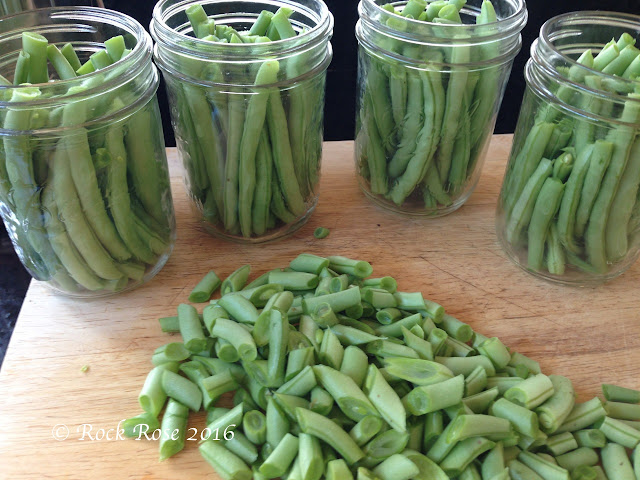 I used to do a lot of preserving when we lived outside Toronto 35 years ago. It is hard to believe that the preserving pan is one of the things that never got thrown away. So I put it to good use this week. 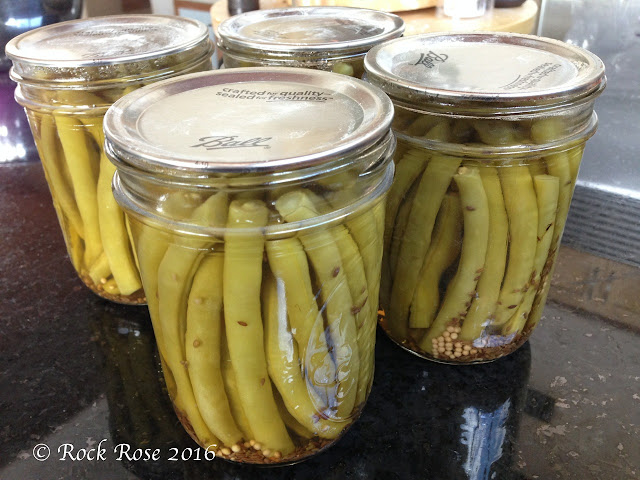 I am sure there are lots of recipes for pickling beans but this was a recipe from the beans we had when we visited friends in Boise some years ago. I have never had enough beans to do it before. They make a great snack with a glass of wine.
To each jar I added 1/2tsp of mustard seed, dill seed, salt and a garlic clove. The recipe calls for a hot red pepper but instead I added 1/4 tsp of dried chile flakes. Then topped each with equal parts of heated apple cider vinegar and water. Processed for 15 minutes.
We had the trimmings for dinner.
But returning to this morning's garden chores I weeded and pulled out errant plants, trimmed back the mint, picked the tomatoes, put all the pots on irrigation, fertilized the citrus with epsom salts, removed dead leaves from the stock tank water lilies and fertilized, filled the bird feeders. Then I collected seeds from the rose campion, Lychnis, bluebonnets and love-in-a-mist to share. I'm done for the day.
Posted by Rock rose at 2:36 PM 5 comments