SOMETIMES YOU JUST GET LUCKY

You know how much I like to find a bargain at a garage sale. We stopped by only one garage sale last weekend and it turned out to be my lucky day. There is nothing like an out of town move to make you reconsider all those $ per lb. items and hold a garage sale. Tucked in the corner of the driveway I saw some large ceramic pots. "Are the pots for sale?" I asked, hopefully. They were and I chose the one I knew would go well with my garden color scheme. $10. Now that's a bargain. 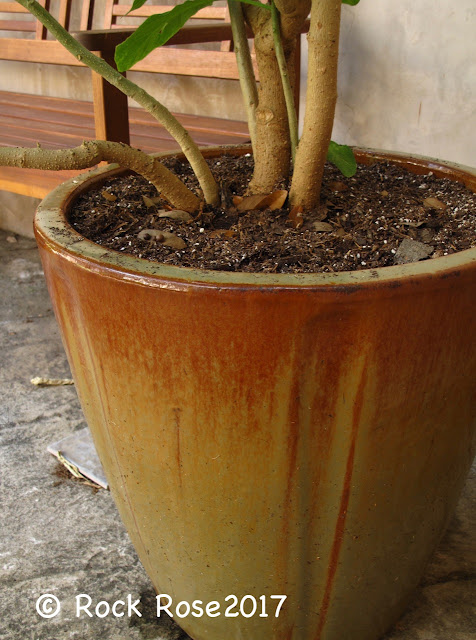 I had overwintered a Brugmansia in the garage and recently moved it outside by the garden entry. For the last few days it had been looking a little sick with yellowing leaves. I suspected it might be pot bound. The new pot would be just perfect. It took the two of us to wrestle it out of the old pot and get it situated in the new pot. It was seriously pot bound. 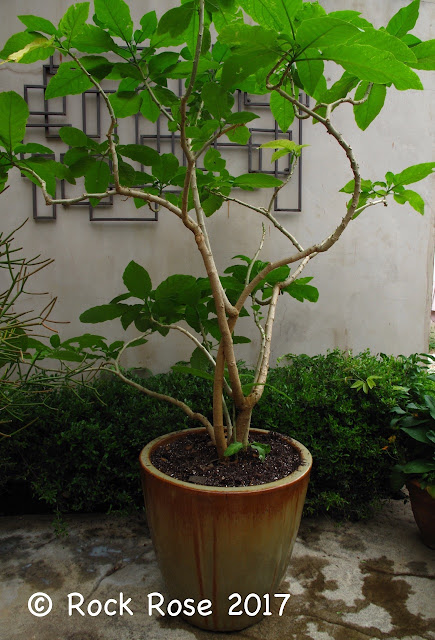 It is now back in its corner by the cactus theatre and is a handy perch for the Carolina wrens who are nesting in the lower right-hand corner. 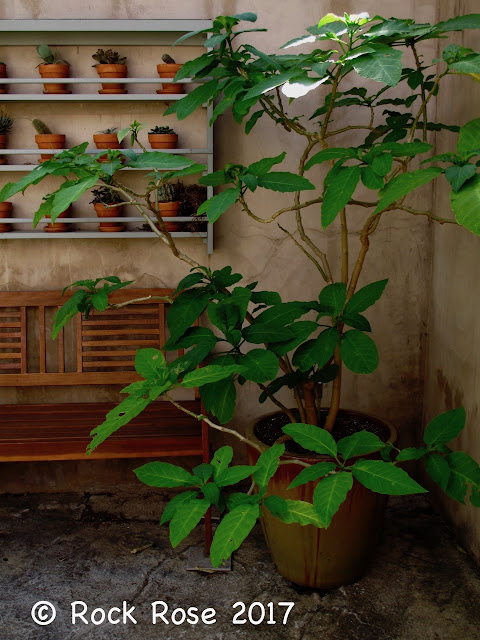 A TALE OF TWO JASMINES 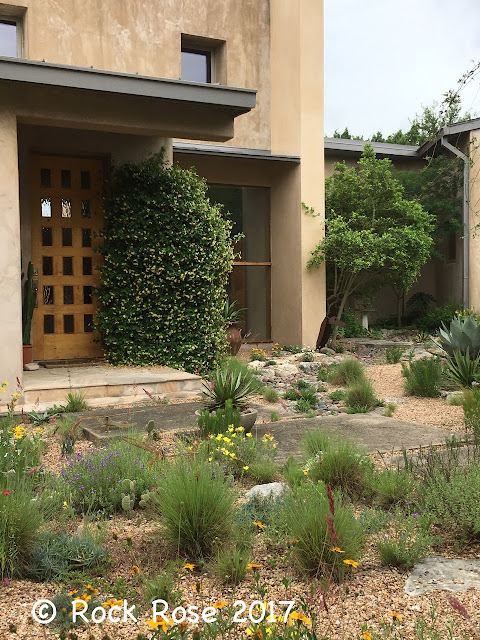 As you can see it is an exuberant vine and constant trimming is necessary to prevent it covering the front door. ( I have seen a few front doors like that over the years) The original wooden trellis attached to the wall broke under the weight last year and there was grave concern over what to do; tear it down and replant or try to salvage? Finding a new one would not be easy as the only one I ever see is the white Confederate jasmine. David drilled into the wall on the side and tied it back with a piece of hosepipe. It was touch and go there for a while because the green hose and the wire attaching it to the wall were quite unsightly. But within a year it had completely covered the hose and now, as I look though the window, I am appreciative of David's fix. 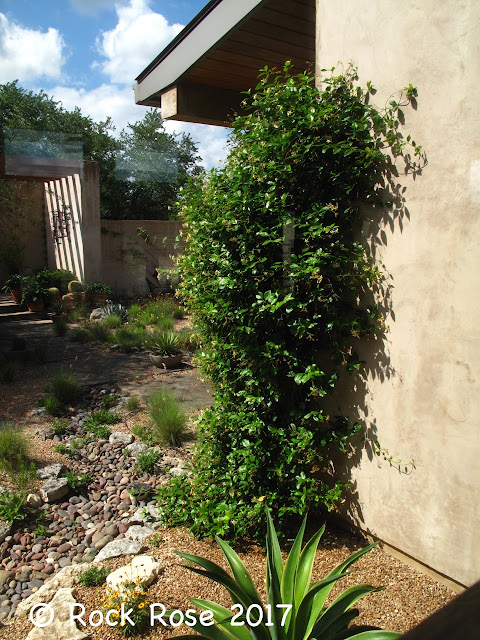 Although growth is similar in that it is a self twining plant and reasonably hardy in central Texas, the flowers are yellow and more exuberant and I do find this one to be hardier than its cousin. 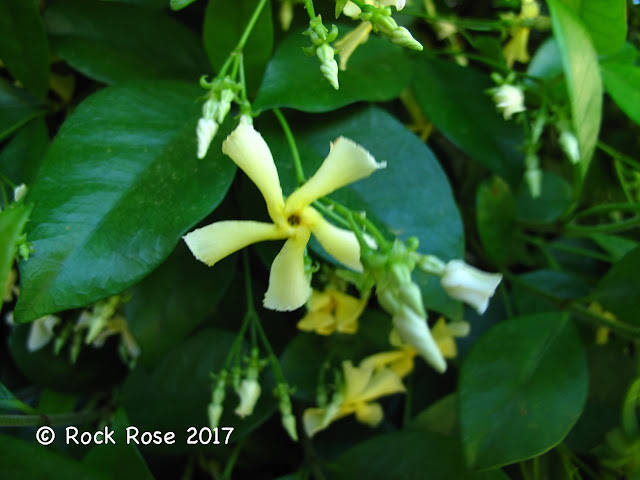 Compare this with the pure white flowers of the white confederate jasmine. 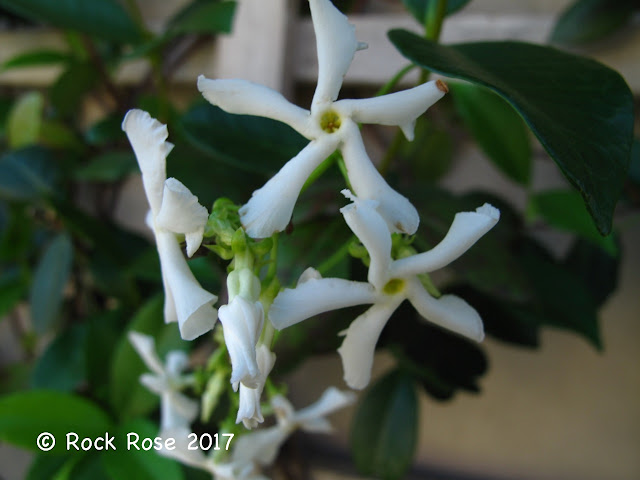 Despite its location on the similar NW facing wall this vine was severely hit by our winter freeze, all its leaves turning brown and many of its stems splitting. However, after pruning and primping, it has made a good recovery in recent weeks and is now flowering. Like the other jasmine it is constant work to keep it in its place. 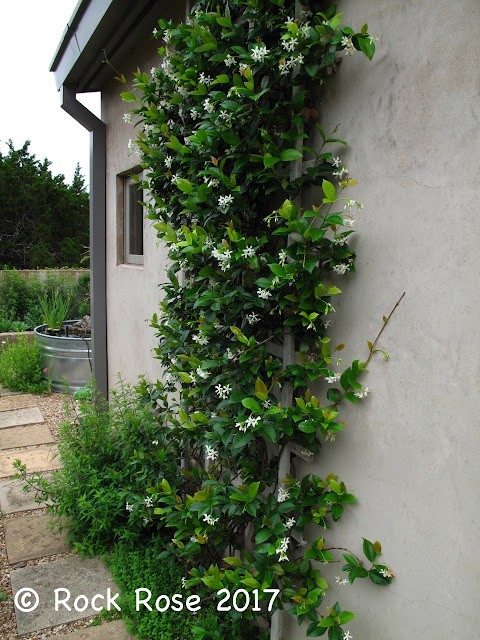 Both are favorites for maintaining an evergreen look over the winter even though they do take work.
Posted by Rock rose at 4:16 PM 6 comments

STILL ON A CACTUS ROLL

I am well known for my inability to turn away an orphan plant. I even go searching for them. Our local Lowes has a reduced table and if I am in the area I always stop in to take a look. In the past I have found some very nice plants on that table and I get satisfaction for restoring them to good health. However, if this week I was thinking about reducing the number of potted plants I have,  all thoughts were out of my head today when I espied these cactus on the $1 table. 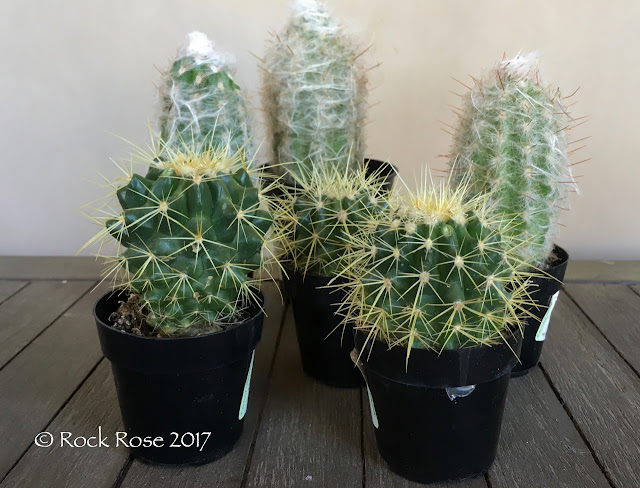 Three Golden Barrel cactus, Echinocereus grusonii, and three Old man of the Andes, Oreocereus trollii. Sometimes when you buy small cactus there is no identification other that 'cactus'. These were identified but their main identification was 'cactus strawflower'. Maybe you can guess what that meant. Each one of these plants had had a strawflower hot glued to the top. All that remained was a withered flower and a goop of glue. If people weren't buying them when the strawflower was looking good, no-one was going to buy them now. Enter, ME. I had to perform painful surgery when I got home. Painful for the two us as I removed the final hardened glue with a pair of tweezers receiving a few stabs for my troubles. 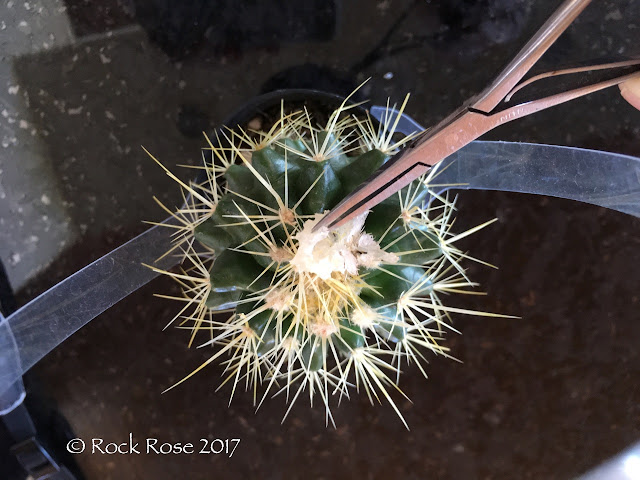 Unfortunately some slight damage and loss of spines to one of the areoles. You may notice that these young barrels look quite different from the older ones. It will be some time before they take on the more ribbed effect. 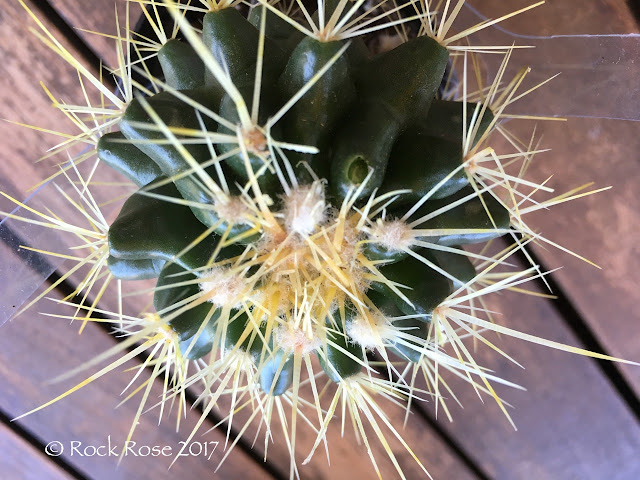 Now they are all cleaned up and I hunted to find pots for them. I potted the Old Man of the Andes in a single pot and individual pots for the barrel cactus. 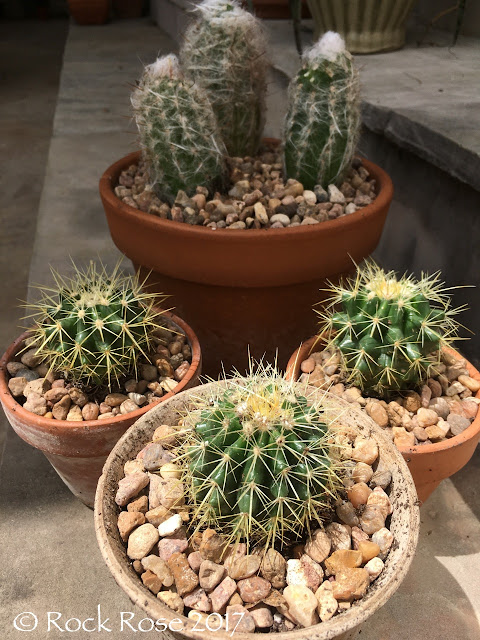 Now find a suitable place for them.

I'm pretty sure that my next hobby is on the near horizon. After all, much as I love to spend every waking hour outdoors, I can't go on for much longer tending this huge and ever expanding garden. Just yesterday, when we visited Zilker gardens, David was contemplating terracing our hillside. "And where are you going to get the rocks from? Down the hill?  !!!" He who said he was never moving another rock. 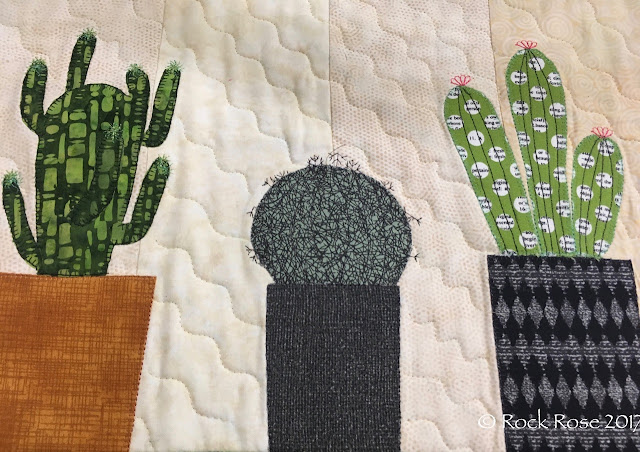 No! My new hobby will not be quilting. But it will be collecting the inspiration for this quilt, which was on the silent auction table yesterday. Cactus should go quite nicely on a small patio, balcony or even indoors in a bright window. That time will come.
Even though I didn't make any purchases at the Austin Cactus and Succulent Show, yesterday, I was still interested to see what exotics might be in my future. 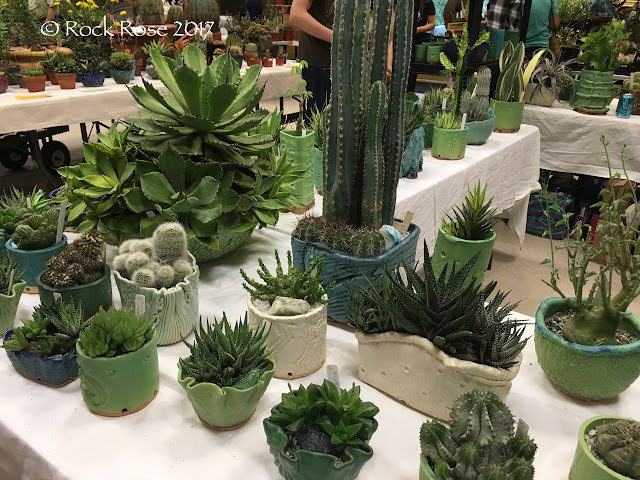 Maybe I will have to invest in some nicer pots. And I shall definitely have to think more about display. 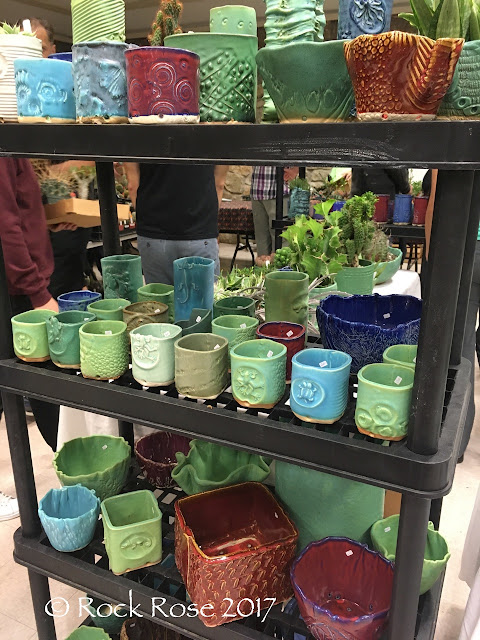 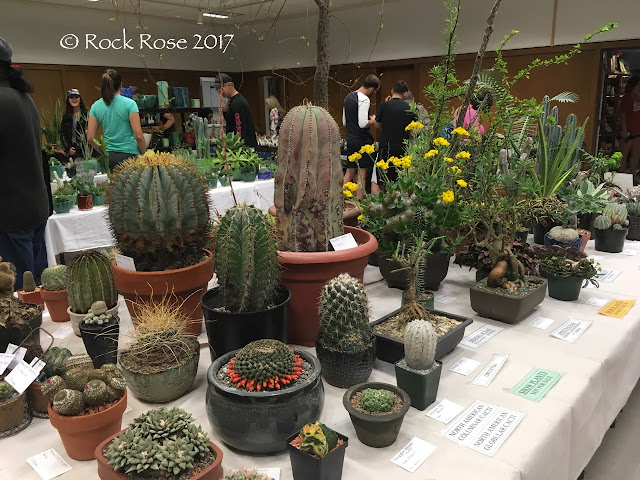 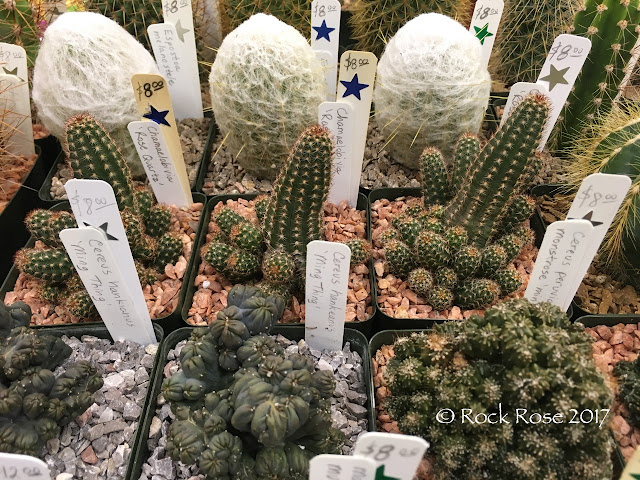 Not that I haven't already amassed quite a collection one way or another! For instance, this barrel cactus came from a concrete drainage ditch in Ahwatukee, Arizona. We were out walking our son's dogs in the neighborhood and I spotted this cactus right in the center of the drainage ditch. Until I went down to take a look I thought it was actually growing out of the crack but discovered it was loose and clearly had been washed down during a rain storm. The only thing I had to hold it was a clean doggy poop bag which I opened and made into a sling. 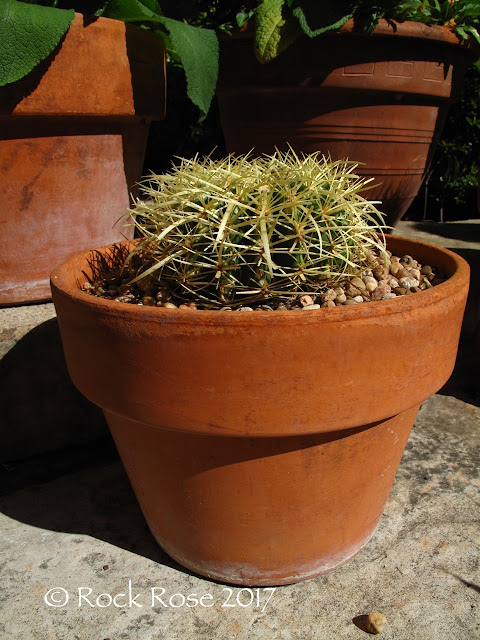 Then a broken pad on this unknown prickly pear. Beavertail?Opuntia basilaris, 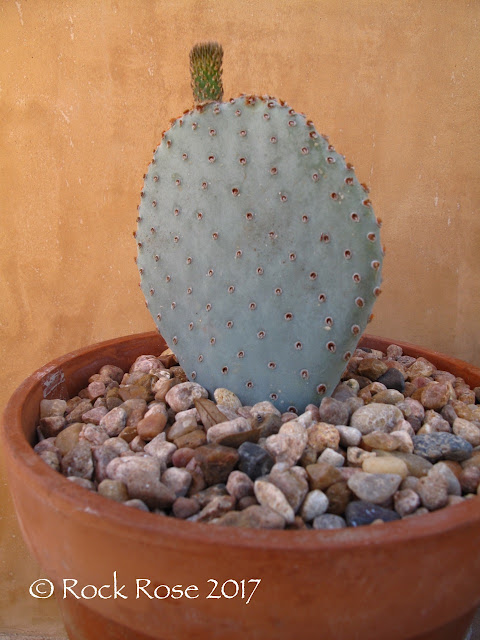 And then there is our very own cactus wren. Our Carolina wren has made a nest on the cactus theater. 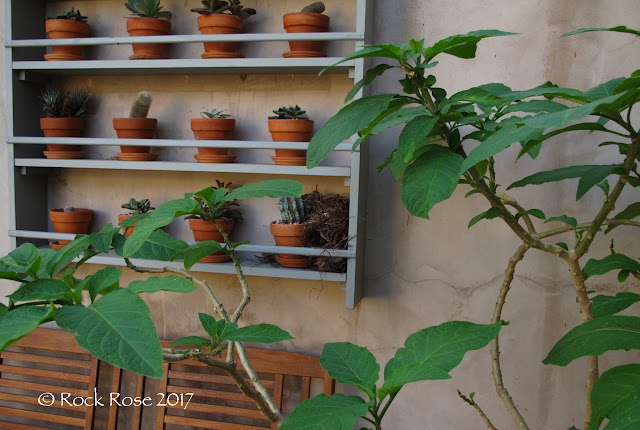 California is not alone in its display of poppies. Look at this clump of California poppies, Eschscholtzia californica, growing in the upper level of my sunken garden. It is probably a seedling of the variety 'white linen' which I purchased many years ago. It still pops up occasionally. 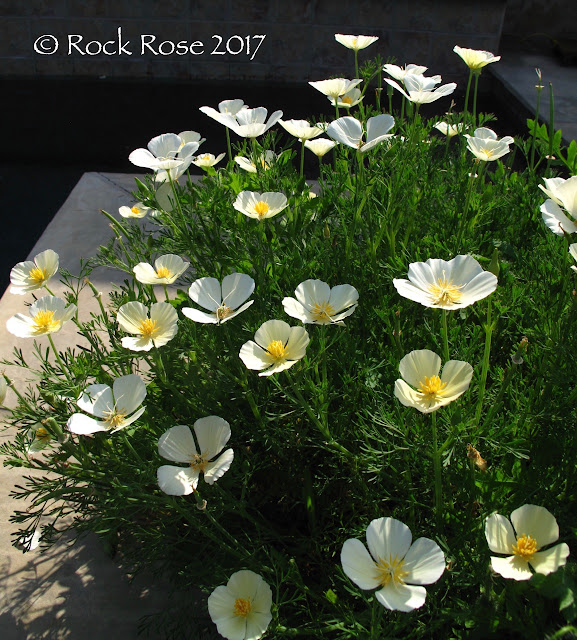 Last year there was a small clump of white poppies in the corner, this year there are even more. It wouldn't be fair to say that I like the white one better than the orange one, but the fact is the orange one seeds with abandon, the white one rarely.
Here they re growing in a fallow bed in the vegetable garden. I shall need that bed soon to plant beans. 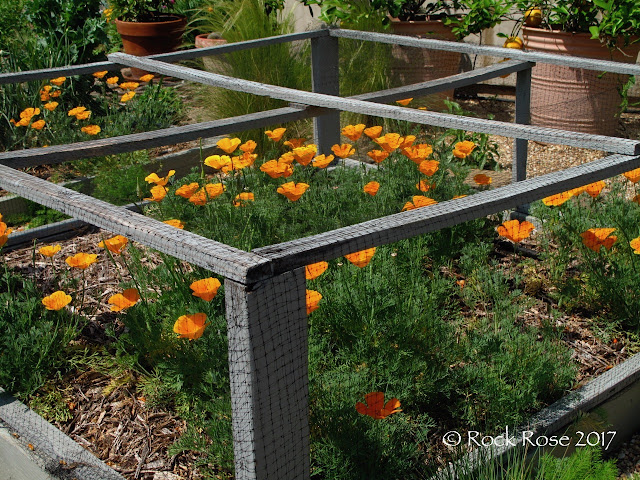 But there are plenty more growing in other places, which if I leave, will be enough to insure a fresh crop next year. It will just be a matter of trying to collect the seeds before the seed capsules open. 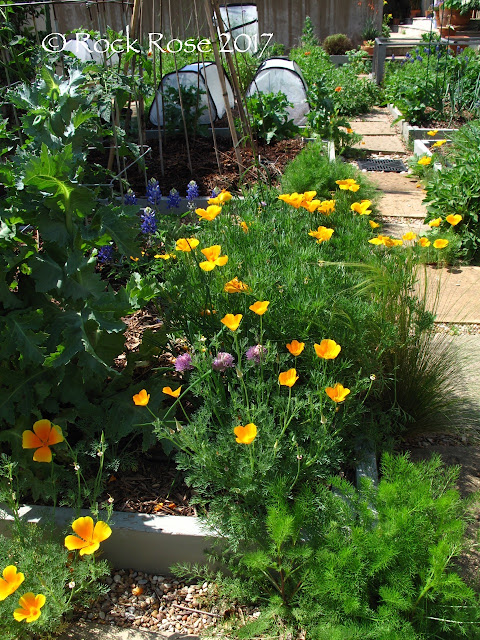 If you haven't realized already I am very tolerant of plants seeding themselves. So there are always plenty of corn poppies, Papaver rhoeas,  flowering in competition with the California poppies. 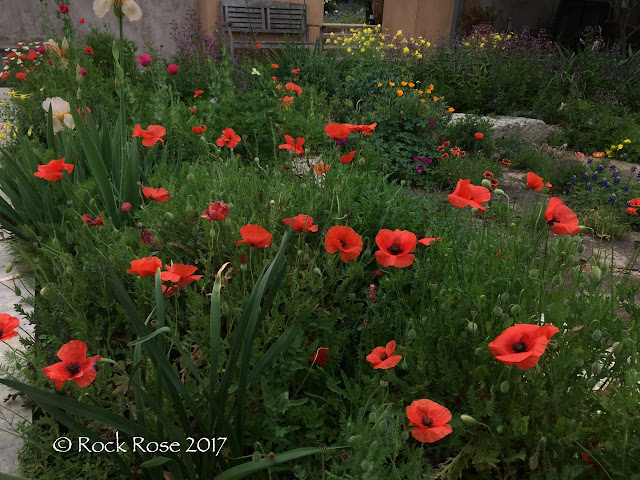 And more intruders in the vegetable garden. 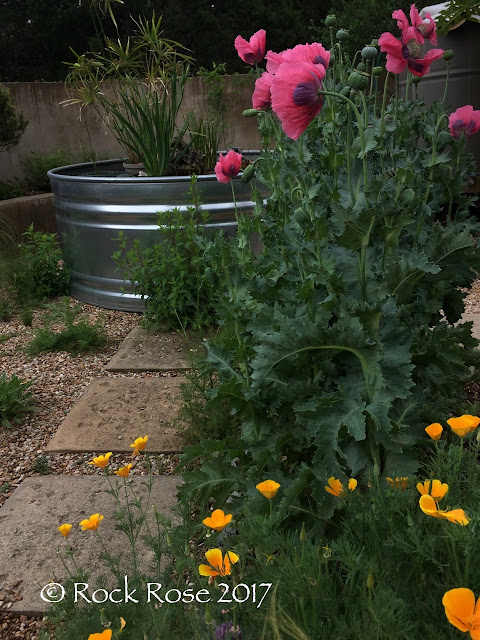 But where are the Lauren's Grape poppy I seeded this year. I have tried to grow that variety several times and have always failed.