I BRING THE STRANGEST THINGS HOME FROM VACATION

I wonder what other people bring back from their vacations? I wonder if, like me, they bring back salt? This is the third time I have brought back salt in the last few years. 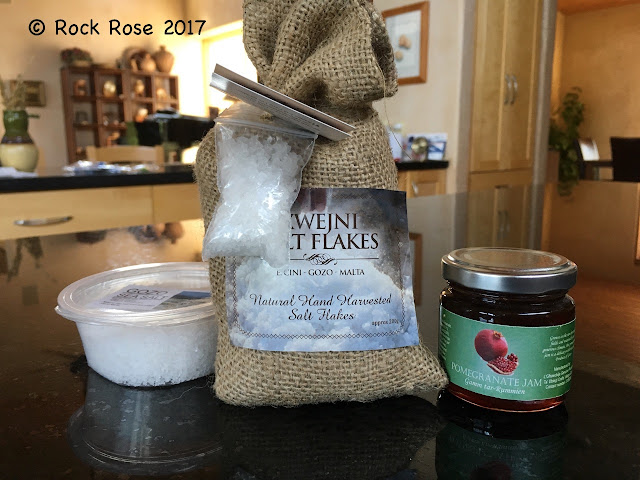 This summer we found ourselves on the Maltese island of Gozo. I would never have heard of this island save for the fact that the Best in Show garden at The Chelsea Flower Show this year was a garden modeled after a quarry in Gozo. We never did come across the quarry on our visit but we did spend a wonderful day on Gozo.
Mgarr was one of the ports of call on our Adriatic cruise and we had a memorable day exploring this tranquil island. 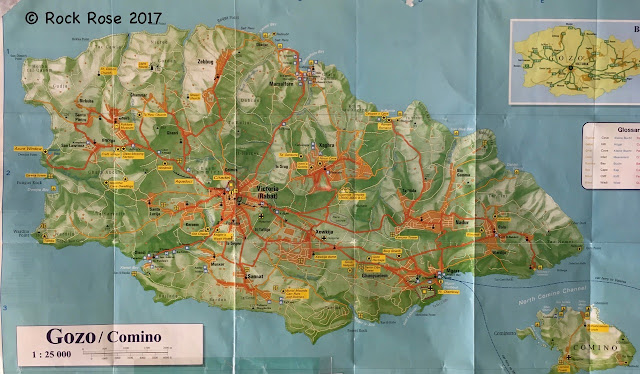 For such a small island there is plenty to see, so we had to pick out a few things in the time we had. The rental car office was close to the dock and we were soon on our way to the Unesco World Heritage, megalithic temple complex, the Ggantija Temples(3600-3000BC). 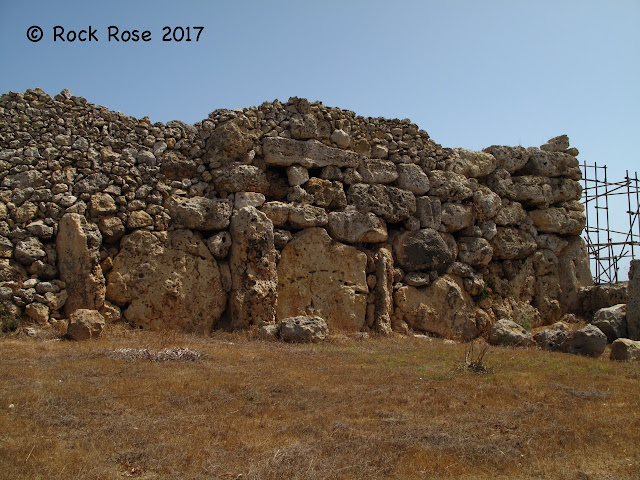 To be honest if you have seen the pyramids then these ancient structures might disappoint, but they have a nice museum and do a good job of explaining who built them and why. 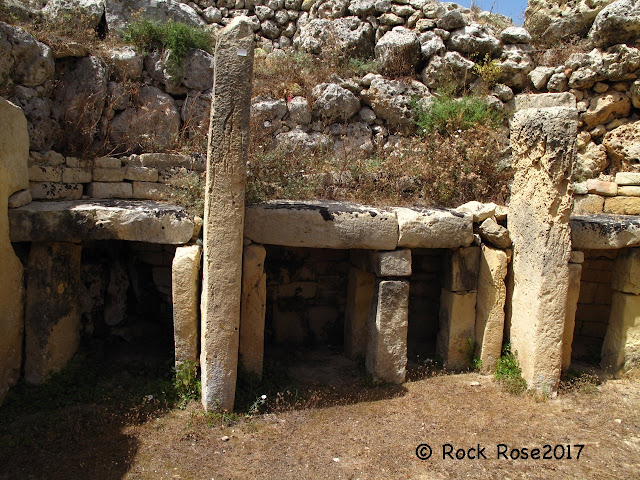 The landscape is dry, seemingly desolate and blindingly white, so as we were leaving we were surprised to come across a man selling some of his home grown produce; pickled capers, honey, pomegranate jam, olive oil and Gozo salt. I'm not sure what the prickly pear pad was doing there but he may have had prickly pear fruit jam as well. 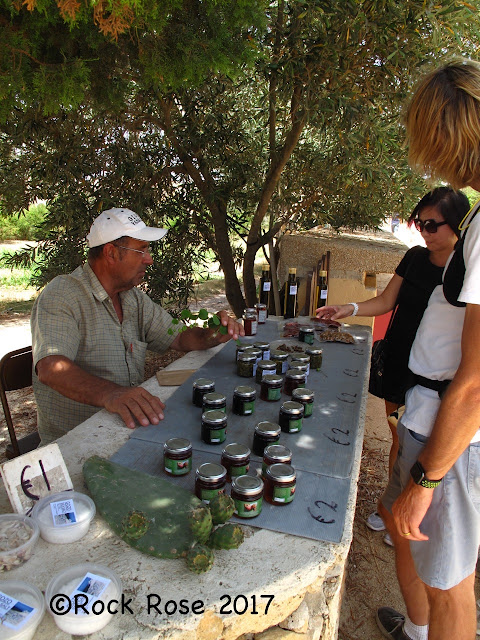 We made a few purchases including a tub of salt. Incidentally you may not be familiar with the flower of the caper bush, Capparis spinosa, which you see growing wild all over the Mediterranean. It is a real beauty. I would love to grow this for the flowers alone.

A short distance from the temple complex was the Ta' Kola windmill, converted into a museum, and included in our Temple visit. This gorgeous bouganvillea just beckoned us to take a photo and the tour of the windmill was interesting. 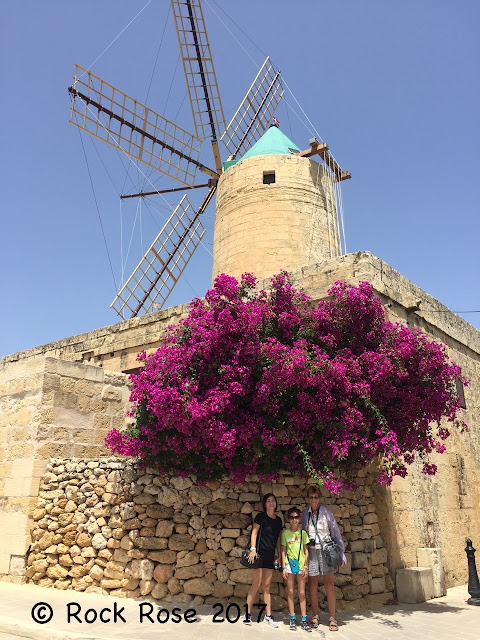 The guys were determined to find a beach but the one we did find was not up to expectations. With no shade it was just too hot for us to eat our picnic lunch. 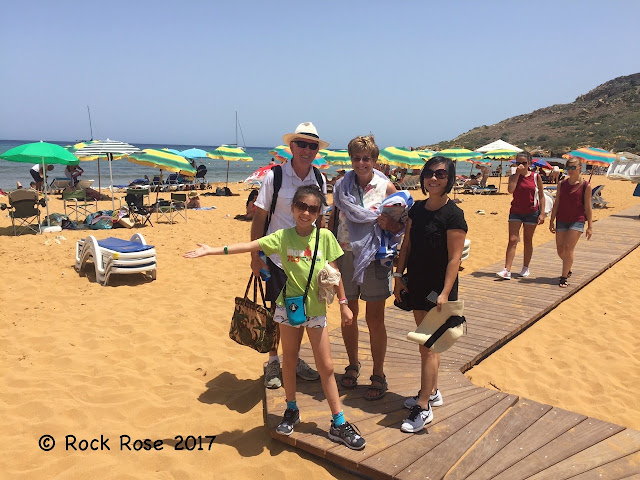 We pressed on the the north side of the island to find the area where they harvested the salt. The rock-cut salt pans date back to Roman times and the salt which forms in the pans is still harvested by a few families today. 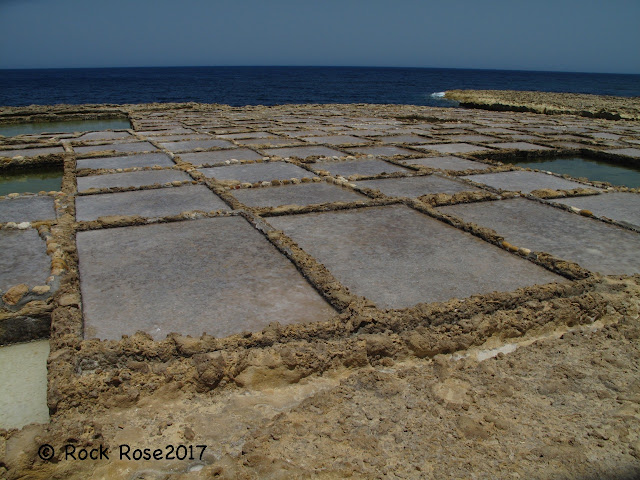 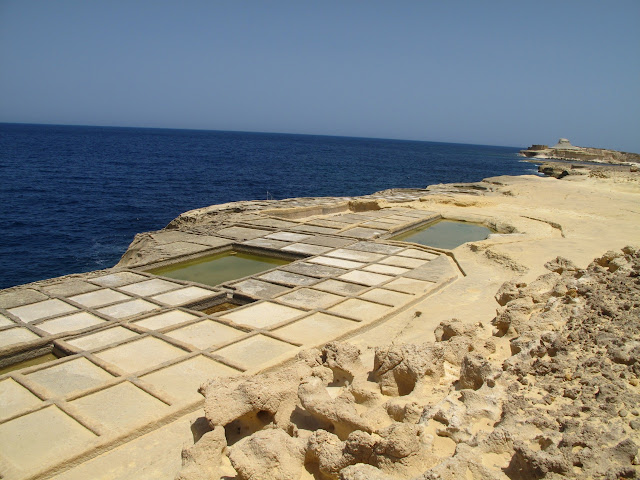 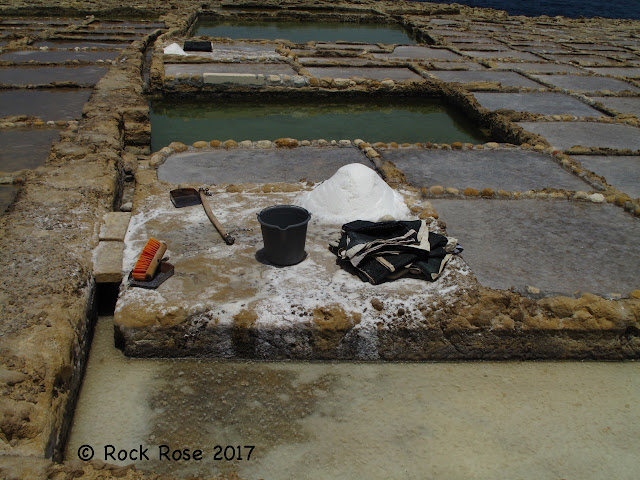 Across the road a cave had been carved into the hillside and a very elderly gentleman was sleeping inside in the heat of the afternoon. It turned out it was his wife down below selling the packages of salt that he had harvested. In halting English she shared with us how 5 generations of her family had worked the salt pans. Now her children had left to live in Malta and had no interest in continuing the family tradition. 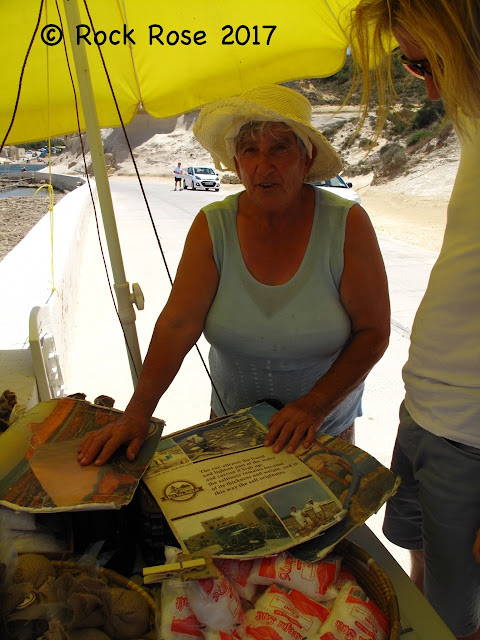 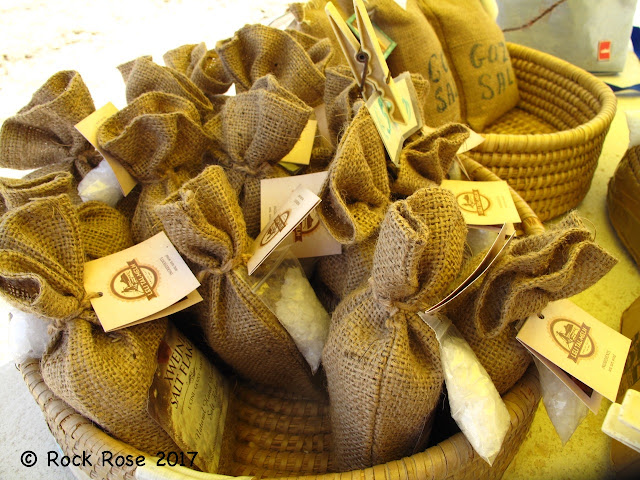 After leaving the road and continuing down a dirt track we finally found that perfect swimming place. A cleft in the rocks with a small pebbly beach below the steep pathway. There were only a few people there and Mark swam all the way out to the open sea. 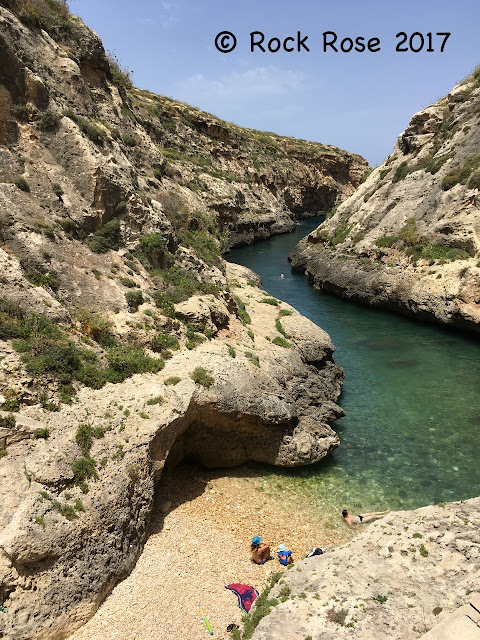 It was then time to make our way back to Mgarr and the tender that would take us back to the ship. It had been a great day and I was taking home salt as well as more suns and moons.....but that's another story.

TO LOVE TEXAS YOU NEED TO KNOW TEXAS

This is never more true than when it comes to gardening. I have lived and gardened in many places around this great country and gardening here is a whole other country, and it's not England! 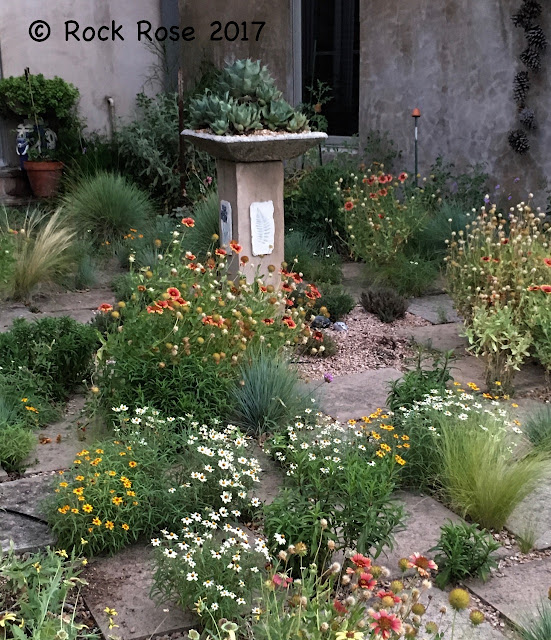 For one thing, we can garden year round, our best seasons being spring and fall. It's that period from June to October when the heat of summer takes its toll on all our plants that makes us wonder, "Is it worth it?"  How are you are feeling about your garden right now, after these endless 100+° days with a lot more to come? Did someone say 107° tomorrow? And, no rain. 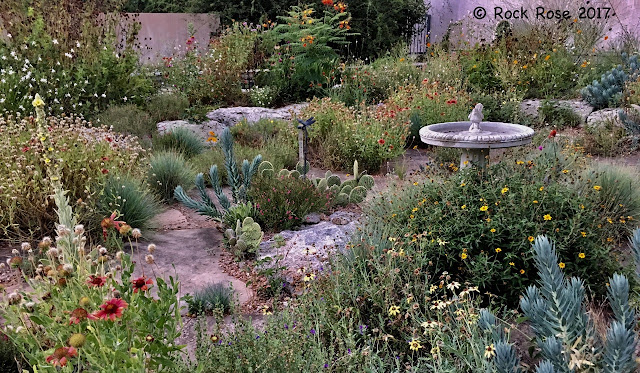 My return from a 4 week vacation was just in time. I have spent the last week both with hose and pruners in hand giving the ground some much needed water and cutting back lots of dead vegetation. Strange how when you leave for 4 weeks there is more than 4 weeks of work to catch up on. That 'Month of Sundays' that my mother used to go on about will not be enough. 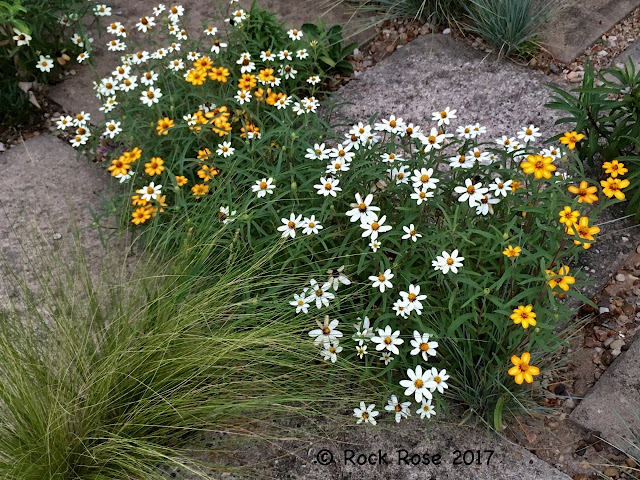 The areas above are my sunken garden and vegetable garden. All the plants you see are self sown. This is a particularly good year for the narrow leaf zinnias-I'll never know why because we had several very cold nights this winter. But one of the reasons the plants in these areas do so well in the summer heat is the cool root run they enjoy under thick paving stones. They survived a whole month without water. Mulch is one thing but solid stone is quite another. 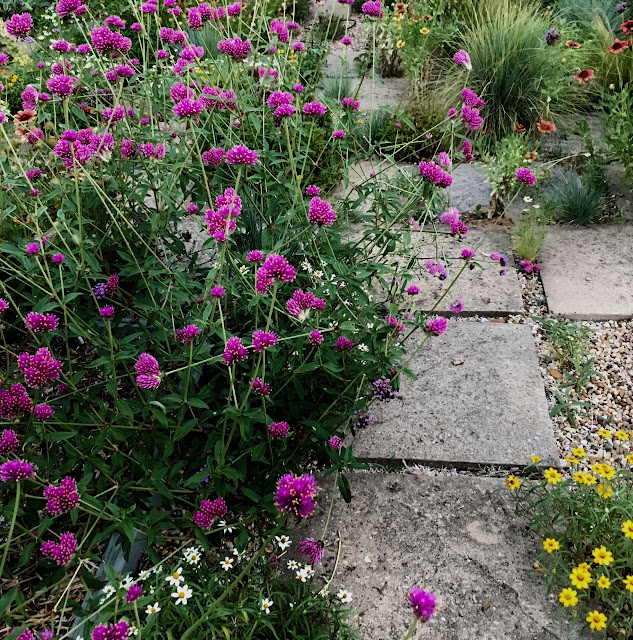 Gomphrena 'Fireworks' can also take the cold and heat. It seems to be one of the hardiest of the gomphrenas with the plants surviving winter cold to burst with their 4th of July display just in time for the celebrations. They can be a bit weedy but I'm not going to complain about that. I just cut them back and back they come. They may benefit from some water from the vegetable beds but other than that they get no additional water. 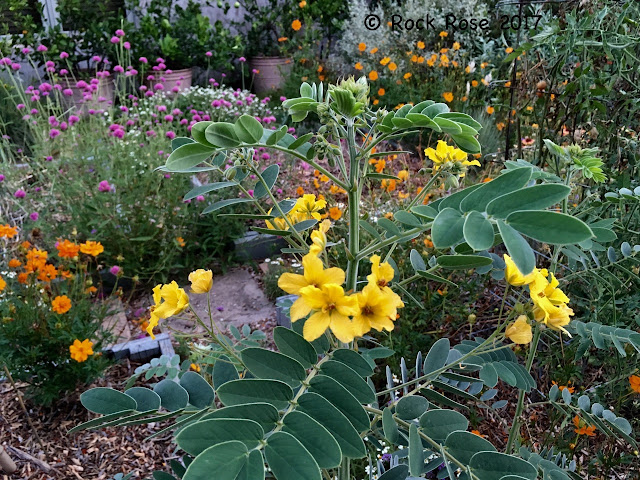 There's not much going on in the vegetable beds right now so I am leaving the Lindheimer senna, Senna lindheimeriana and orange cosmos, Cosmos sulphureus, which seeded there, until fall vegetable planting time.
The blanket flowers just keep on flowering and that is just fine with me and the goldfinches. I particularly like the darker colored ones that appear. 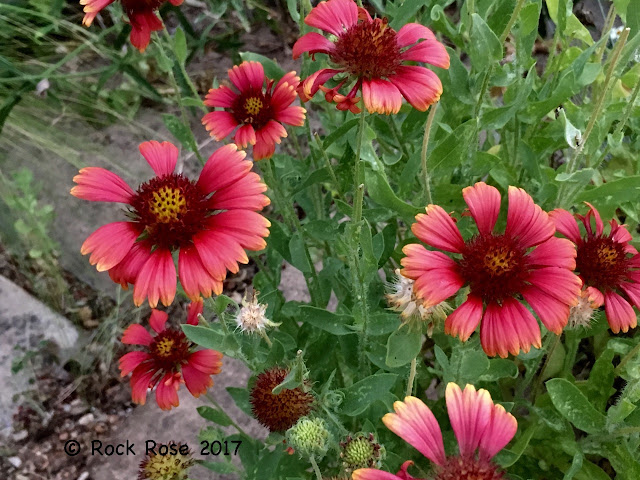 And this surprise yellow one. 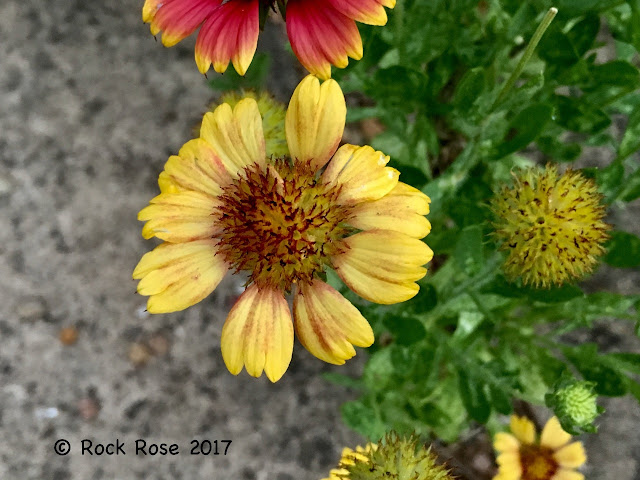 But that aside one thing you have to know about summer in Texas is that it is more than worthwhile helping your plants get through the heat because they are sure to give you a fine display during our much anticipated fall. And if you don't want to spend too much on water then collect every drop you can. A bucket in the shower, a bucket under the AC fall out, wash your vegetables into a bowl and water your plants with it. There are lots of times we just let water run down the drain when it could be collected for the garden.

A friend went away for a couple of weeks leaving her indoor cat with only an occasional visitor to feed and water him. When she arrived home the cat never stopped meowing for over an hour. He had so much to tell her, mostly about how much he had missed her but probably about leaving him for so long too. 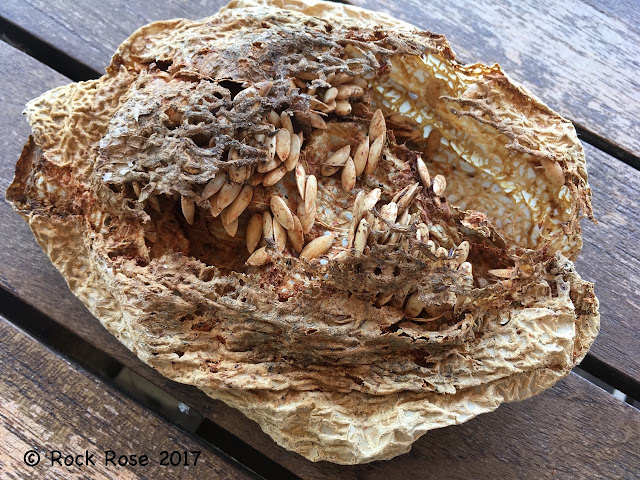 If plants could do the same thing I know I would be getting an ear-full right now. While I was busy swanning around Europe for a month my poor garden was slowly desiccating. I really did try my best to prepare it for my absence but I also rely on a little rainfall to help out. It was not forthcoming this time and my drip irrigation system is no match for this brutal Texas sun. (The garden is too much of a responsibility to leave to someone so I let it fend for itself.) There is a lot of damage out there.
You probably had no problem identifying the desiccated individual above. When I left there were a couple of nice green cantaloupes, which I carefully wrapped in netting, to thwart the critters. 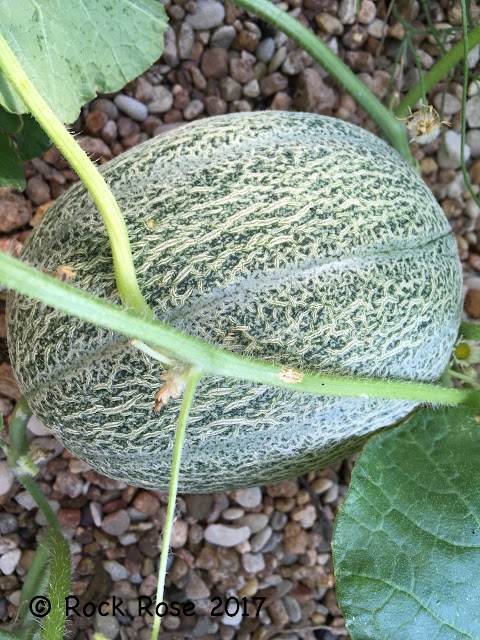 I was so looking forward to enjoying a plate of melon with prosciutto, just as we have had many times in the past 4 weeks. 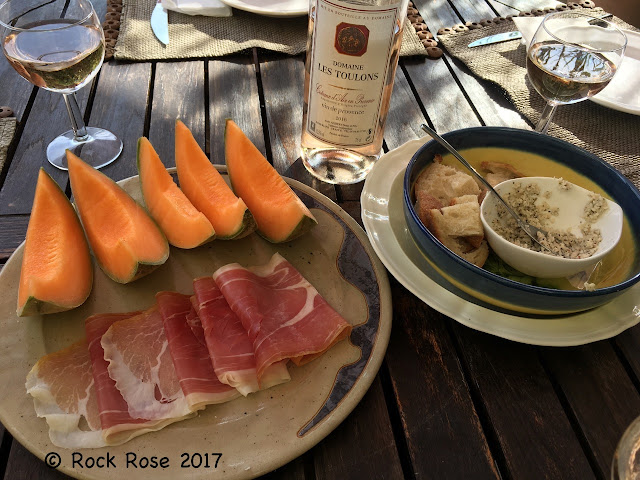 So, you can imagine how I felt when the reality sank in that my lovely cantaloupes would not be on the menu. Ah! well, maybe next year.

All my cactus and agaves are in pretty bad shape. Most of them were under cover where they only get morning sun but the dry heat has most of them shriveled and sunburnt. There is plenty of sun scald on the ones that are in the open. 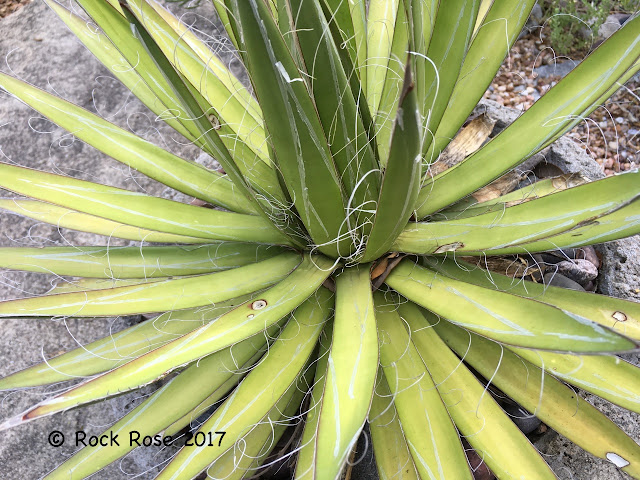 But I have learnt one thing over the years and that is that these will mostly repair themselves when they get a little water and temperatures moderate. For now I am getting out the sunscreen cloth to give them a little relief and next year I will put them under the trees outside the garden.

It is never a good thing to arrive home in the late afternoon, when the day has taken its toll. That first  walk around the garden can be heartbreaking.  Much better to wait until the morning when new flowers will have opened on the gaura and will be wafting on the early morning, cooler air. Cooler by Texas standards at 75° and enough to give a little respite for the plants.

My first morning, jet lag had me up before 5am and, in the dark, doing my first job; filling the stock tank pond in the entry garden which was down about 12" Fortunately because the plants are in floating islands they had survived the drop even though leaning. As daylight broke there were a couple of lovely surprises. Both the white echinopsis and the plumeria were flowering. 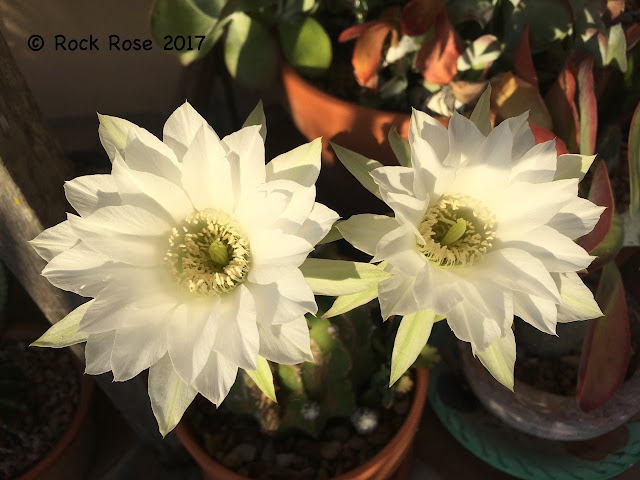 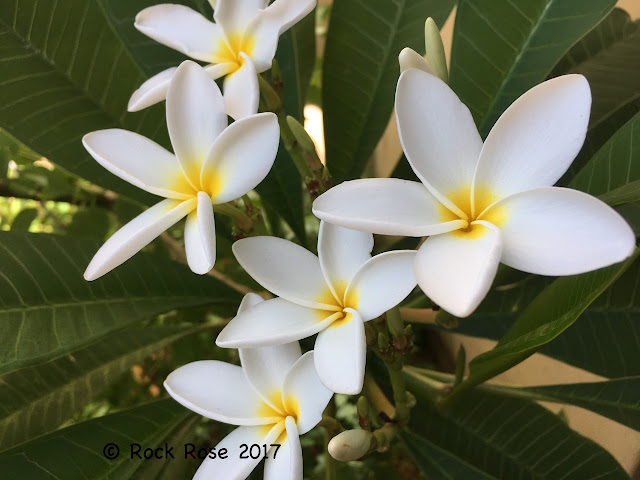 Then I began to water with the hose giving the plants growing in the gravel a much needed drink. That has been my main focus for two days in the short window of cooler mornings. Just a little water each day to get the plants used to the fact that I am home to take care of them. And this morning a water lily in the recently filled stock tank bloomed with a beautiful white flower. ( A passalong from my friend Cat at the Whimsical Gardener) 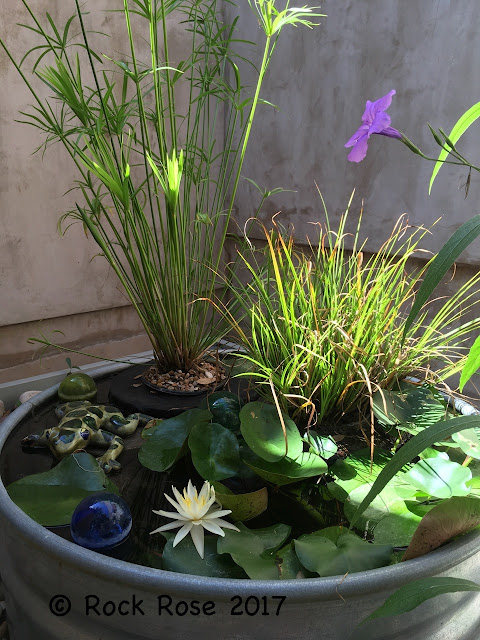 Things are already starting to look up.
Posted by Rock rose at 6:19 AM 21 comments