Having worked outside all morning, in the ever increasing temperature and humidity, I told myself I could take it easy this afternoon. But isn't it true that a gardener always remembers something else that needs to be done. I had forgotten to fertilize my orchids ( they deserved a treat for blooming so well) and needed to get rain water from the tanks. Then I remembered how I must pot up the begonias that have been growing in water and move them and another potted one to an outdoor spot in the shade where they would be on a periodic watering from the drip system during my absence. That job took me out into the front garden at 2pm where I spotted this. I wouldn't have missed this moment for the world. The balloon cactus, Parodia magnifica formerly Notocactus magnificus, was putting on a worthy show. It had bloomed with one or two flowers already but this was a crown of flowers. Splendida. Native to Brazil and Uruguay, its native habitat is hilly grasslands where the summers are warm and winters cool but well above freezing.  In the USA it must be protected in zones below 9 so I take it into the potting shed or garage for the winter to keep it dry.
In previous years it has suffered the visits of cactus bugs that suck the sap leaving behind rings of lighter green. When I became aware of this last year I took precautions to check the plant regularly and remove the invaders. 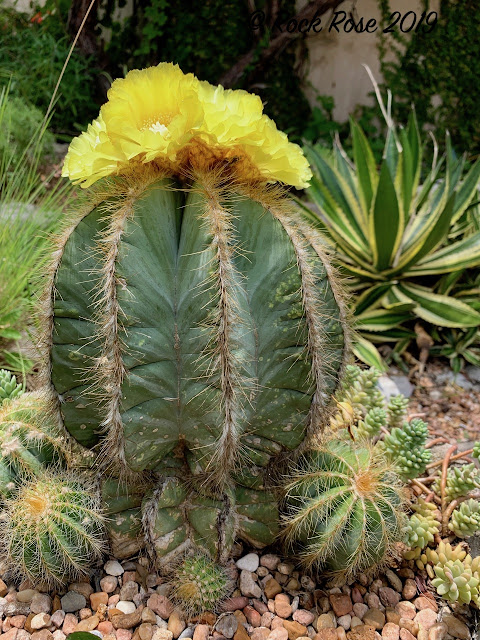 As well as periodic blooming through the summer season babies are forming at the base but I don't have plans to remove them at this time.
Posted by Rock rose at 2:54 PM 6 comments