THE YEAR THAT I PRUNED

This will go down in my gardening history as the year I pruned. It wouldn't take much for anyone visiting my garden to see that pruning is not high on my list of gardening skills. Pruning usually comes as a last desperate measure to deal with the unruly growth about to swallow the whole garden. The first to be pruned was the Rosa Zephirine drouhin in the front courtyard. 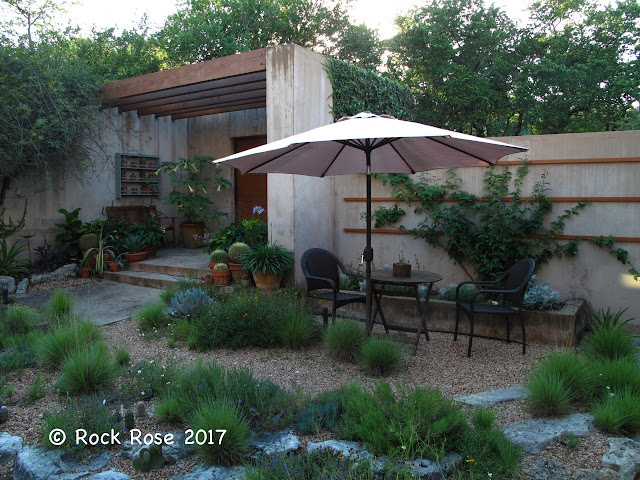 This is a last ditch effort on my part to save this rose. It was in terrible shape with mostly old wood that had become unproductive. All kinds of errant shoots were interfering with our sitting comfortably in this area. At the same time the wire supports along the wall were sagging and looking quite unsightly. I came across the idea of replacing the wire with wood at East Ruston Old Vicarage and thought it would look well on this wall, the lines playing off the over head beams to the left. A quick word with David and no sooner said than done. The rose liked it too because it has sent out all manner of new shoots with a promise of a better flowering next year.
The 1x2" boards are offset from the wall using a piece of cut sprinkler pipe. That gives me enough room to tie in the canes and and provide breathing space behind. I am looking forward to a floriferous rose next year. 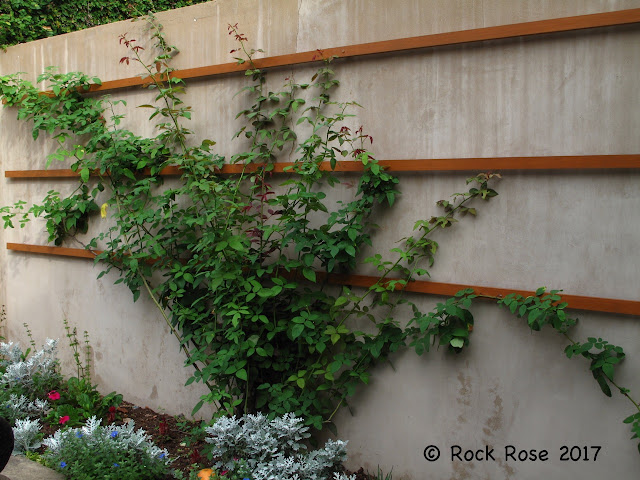 Pruning job number 2 was a much bigger job. It involved the pyracantha in the herb garden. If only I had pruned it annually keeping its growth tight against the wall. 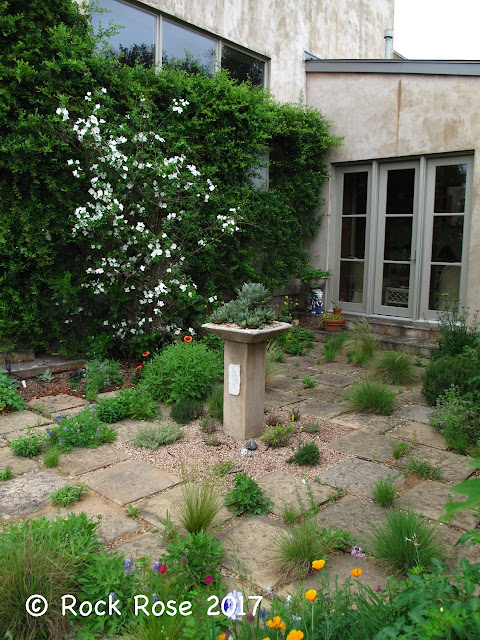 When a job becomes a repetitive nightmare then you know it is time to do something. The pyracantha had just become a wall of solid, thick green growth with the need to constantly prune. A couple of times in the past the weight had caused it to fall off the wall. The job of climbing the extension ladder to deal with the top growth always fell to David. Then this spring, on the Master Gardeners' tour I learnt a better look for a pyracantha. It may take some time for mine to look like this but I think I will get there in the end. 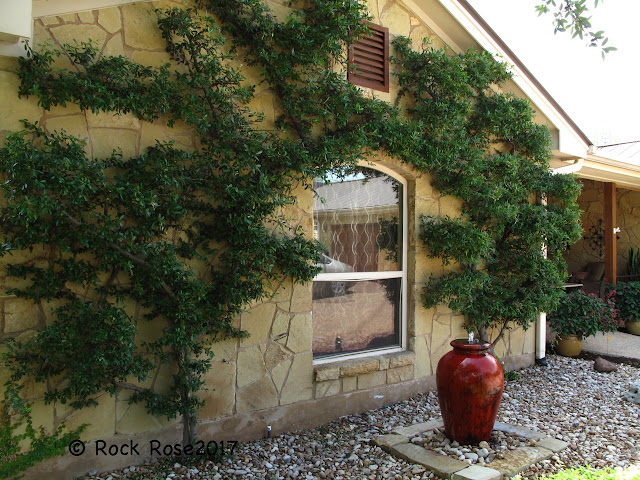 It took over a week of work to get it to look like this. Up and down the ladder deciding which branches should be cut back. I did all the lower work unaided but needed David to prune out the top section, as I told him which branch he could cut. I am pleased with the result and hope that in time I will get it all pruned back to hug the wall. Already it has sent out new shoots and I have been cutting back all the new growth. I think the mocking bird will not be happy as this is his winter hangout. 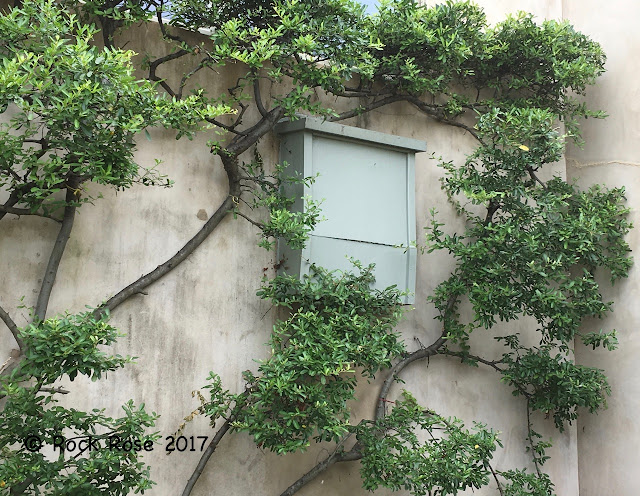 And if it doesn't work I can always start over. In the meantime that wall needs a good cleaning.

Twice this morning I was surprised by a new heady fragrance in the air and I think I know why. At 9:30am even though the thermometer said 82° it felt like 93° and that humidity is picking up the fragrance. 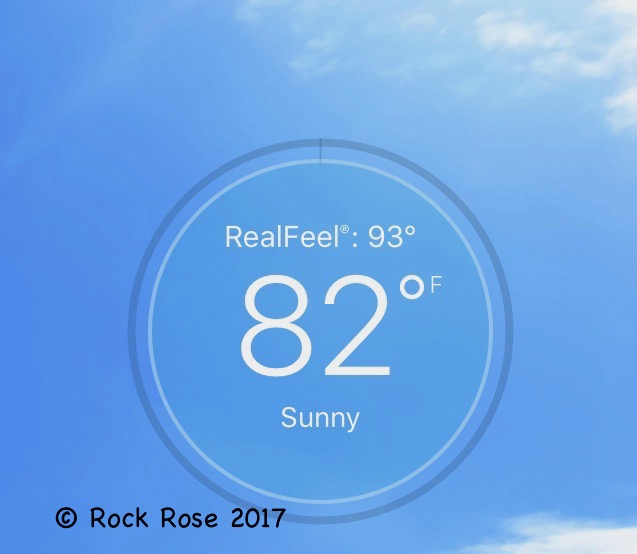 After many weeks without appreciable rain, 4 weeks ago we had over an inch. It seemed to wake everything up. We have moved into summer mode with daily temperatures in the high 90s and insufferable humidity. I'm sure it never used to be like this. Houston maybe but not Austin.


I can only bear to be outside for a short period of time before drowning in sweat. Very early I was out in the front courtyard, which has had little supplemental irrigation. The day lilies were going into a serious decline with brown withered leaves. A little hand watering was in order. That was when I noticed a fragrance and turning to look I realized it must be coming from the summer phlox, Phlox paniculata 'John Fanick'. I bent down to sniff and sure enough that was the source. I must get more of this plant next year. 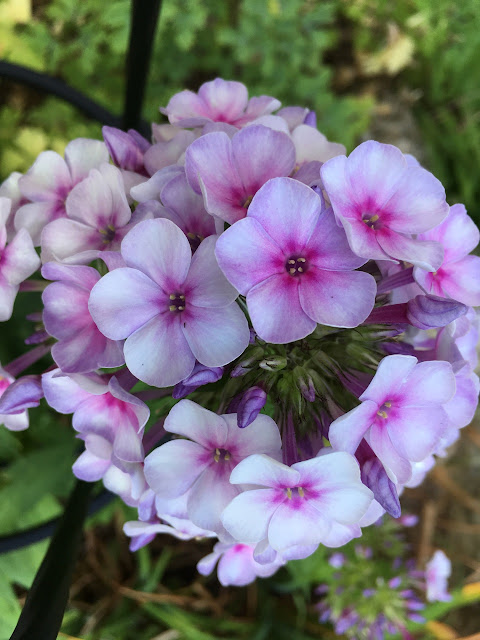 A short time later I was crossing the driveway when another blast of fragrance hit me. There is only one plant blooming out there and that is the retama, Parkinsonia aculeate, which is in magnificent flower. The sound of bees along with that fragrance shouted 'Summer'. 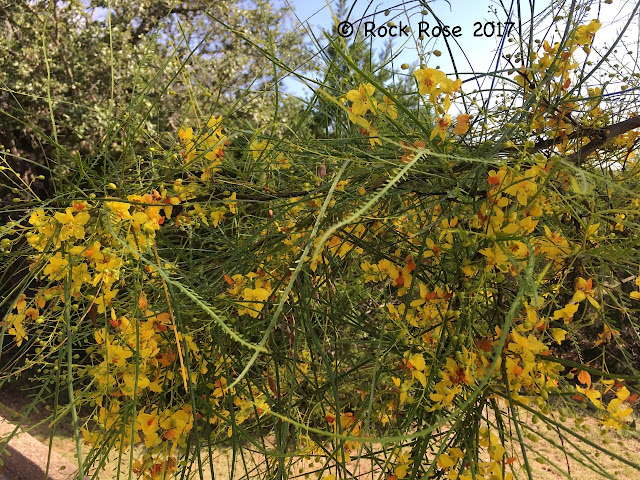 In the vegetable garden I feel like I am in California with the fragrance of citrus. A long dry period followed by rain seems to have triggered a second bloom.
The same with the Meyer lemon. I could never have too many of those so I am hoping this will mean a bountiful crop. I hope it isn't too warm out there for the bees. 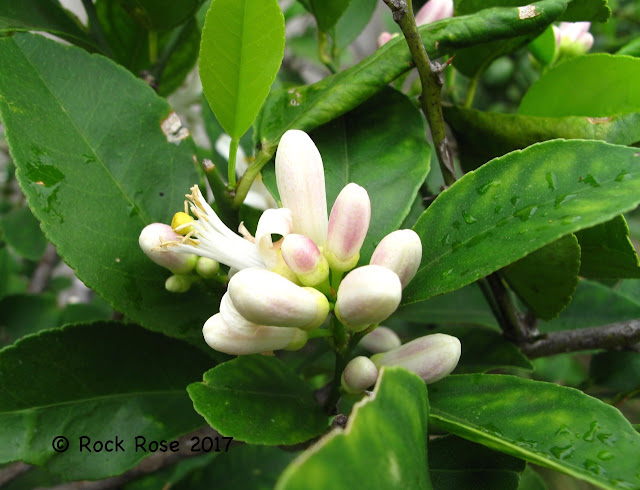 Calamondin orange tree with new blooms. I'm hoping for another marmalade making day in the winter. 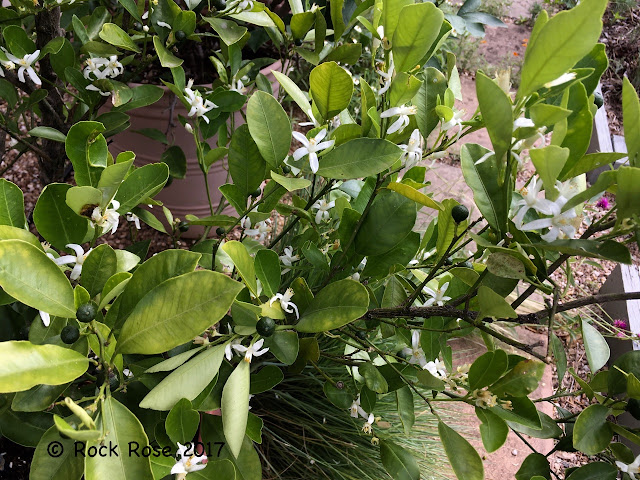 Lots of plants have responded to the rain. The Texas sage, day lilies, California poppies and iris are all flowering for the second time. I'm wondering what the rest of the year holds in store for us all.
Posted by Rock rose at 10:43 AM 3 comments

Do you have a hard time finding the perfect plant to fill in the spaces in your pavers? If you've tried thyme you know how much work it is to keep it looking presentable. The same with grass. But quite by accident I found the perfect plant.  Creeping oregano, Origanum vulgare humile. 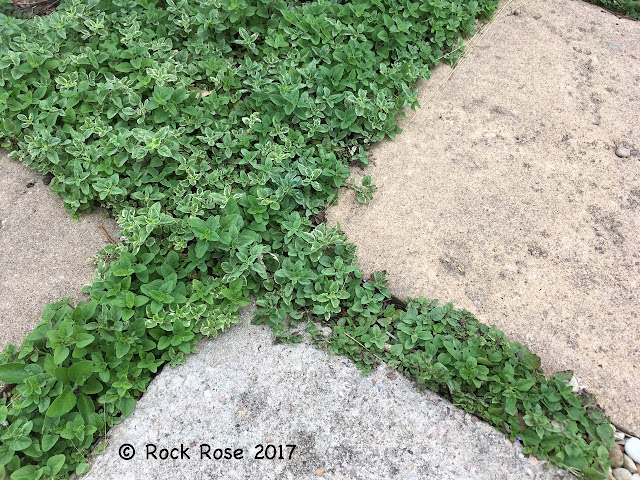 I had originally planted it in my herb garden but finally moved it to a new home last year, outside the potting shed. It was more than happy there and began to spread into the spaces between the pavers. It's tight, low growing appearance makes it perfect for this application. The original plant was variegated but much of that has been lost with just the odd few places still showing their former character. 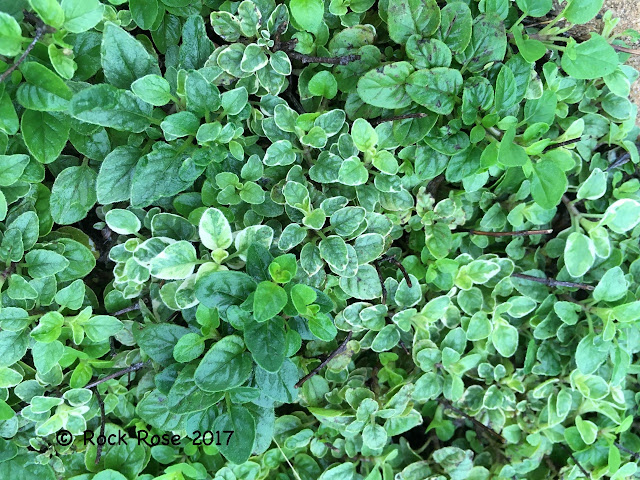 Just the odd trim now and then maintains its neat and tidy appearance. Because it is so compact it takes foot traffic well. I am hoping it will creep to the front of the potting shed door and replace the mint. In fact I am more than happy for it to spread throughout the paving. But then it would have to oust the mint and I'm not sure it could do that.
Posted by Rock rose at 9:50 PM 13 comments

One thing that always surprises me, and more so this year because we had such an early spring, is how much is still blooming in the June garden. Our recents rains have probably helped extend the life of some plants, like the California poppies, which make a great companion for the Bee Balm, Peter's purple. 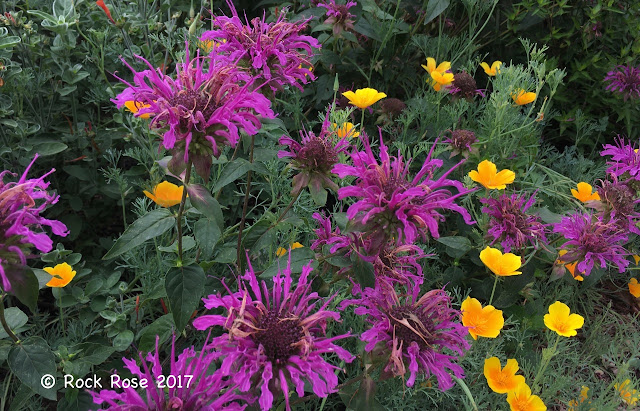 And when I thought the white one on the edge of the pool looked ready to pack it in for the year it decided to bloom again. Admittedly not quite as perfect and the flowers are smaller, but it still has a few days of bloom left before I cut it back. 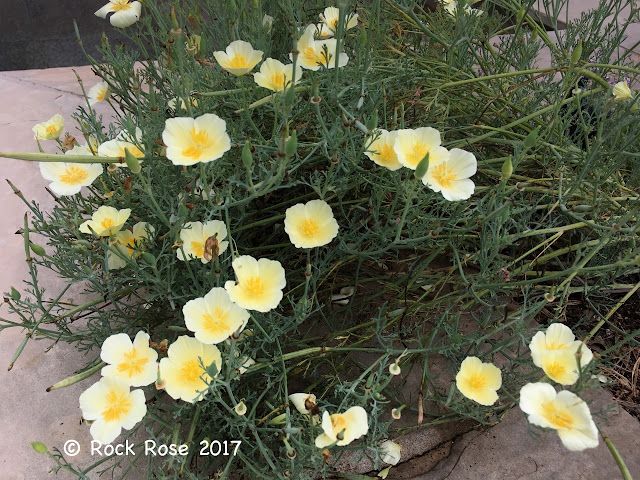 This nameless day lily, a plant rescue, is the last of the day lilies to bloom. A parsley plant, going to seed, adds a fine backdrop. 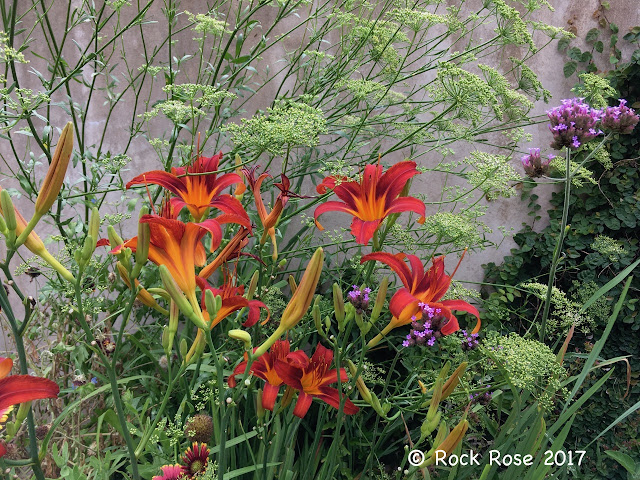 The sunken garden is due for a big tidy, which involves cutting back the skullcaps, chocolate daisies, and blanket flowers to keep them blooming. 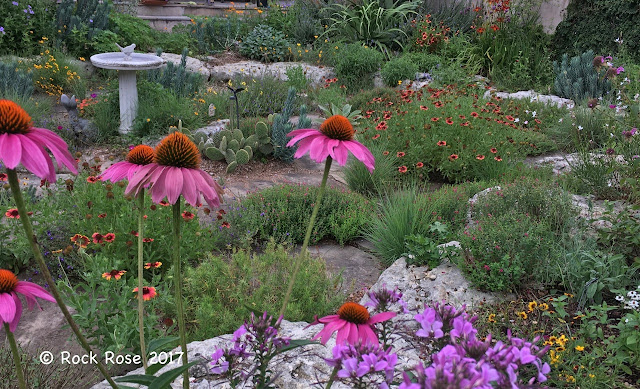 The same applies to the gaura which seems want to take over. 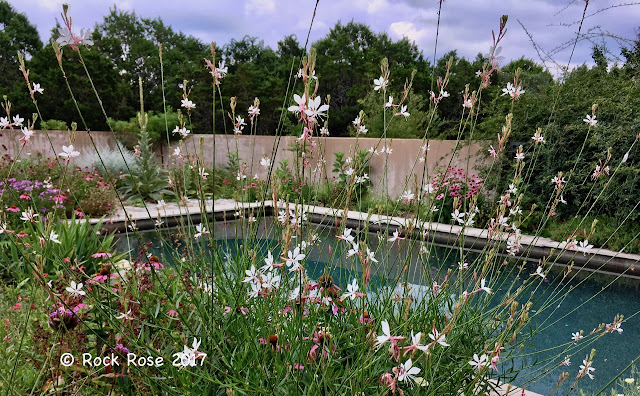 I have struggled to grow cleome in the past but this year seems to be the year for it to do well. I wish I had bought more than just the one. 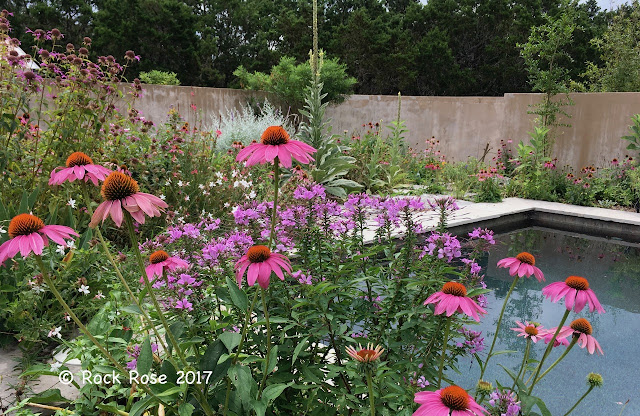 I am thrilled with the hanging basket that I purchased this year. It was in a smaller basket and when the wind knocked to the ground breaking one of the plastic hangers, I was forced to repot it in a larger basket, in which I used baby diapers line the bottom! I pruned it back and it has now made up for lost time. 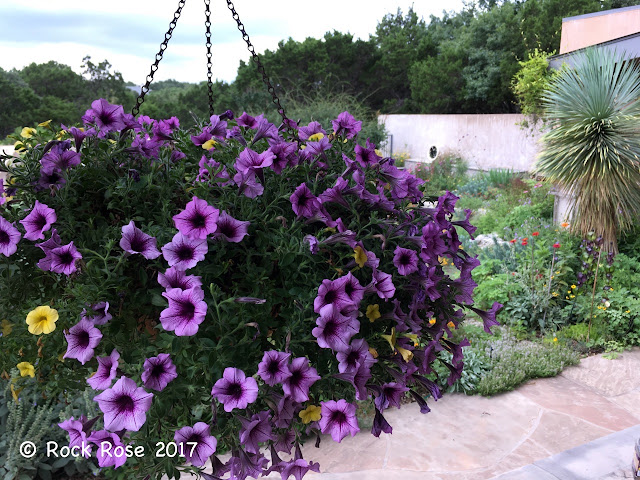 It hangs outside the kitchen window where I can admire it. 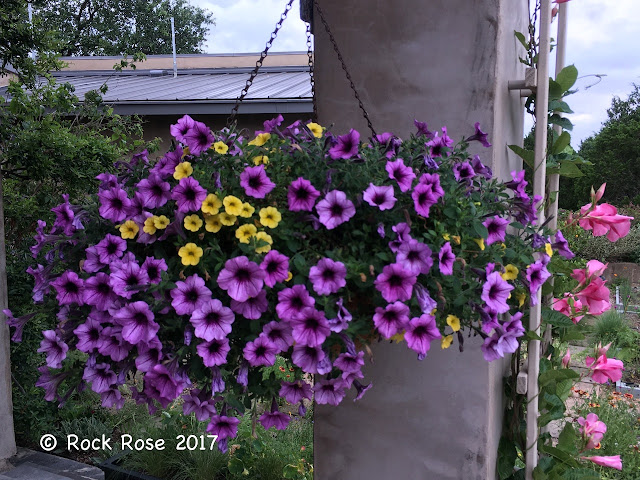 In the front garden now that the spring bloomers have faded, there is just the odd pop of color from a flowering cactus. 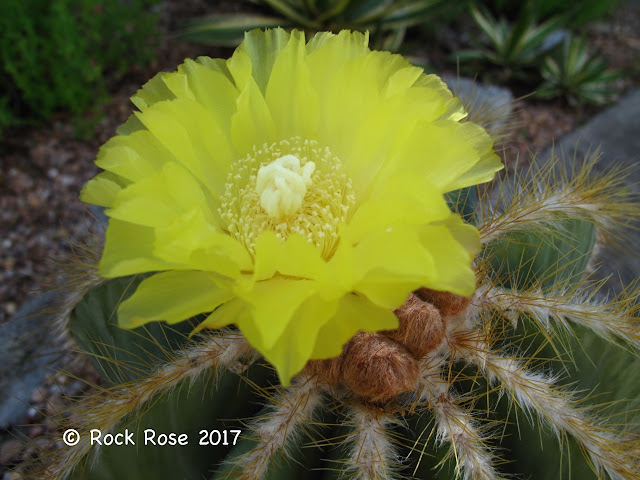 Or the peach brugmansia which opened up a whole new display of flowers today. 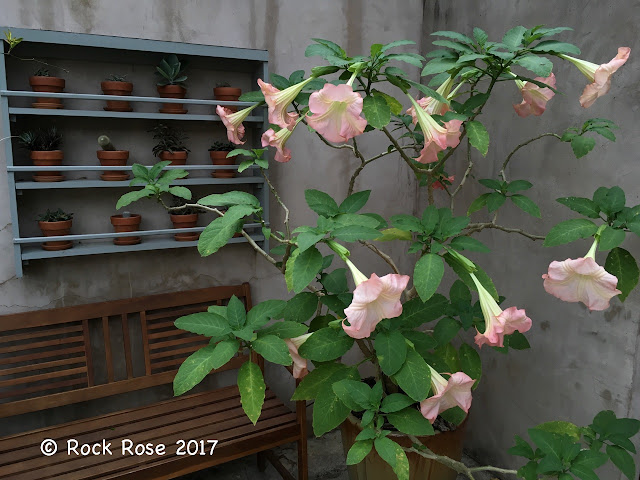 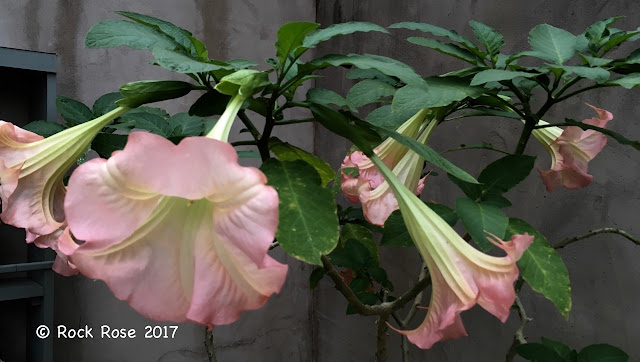 For a little respite from all this color I just have to take a walk outside the gate. There everything is green and serene. 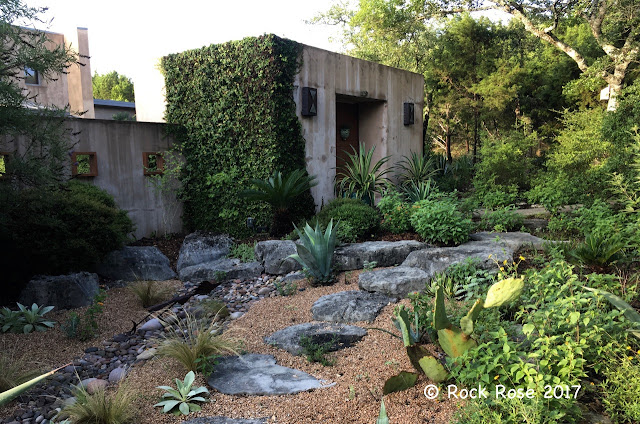 When I saw this flower growing in Melody McMahon's garden in San Antonio she promised me some cuttings. I met up with her last summer at the Texas Hill Country Olive ranch where she passed on a couple of those cuttings. I was delighted when they survived the winter indoors. I repotted them in late winter and a few weeks ago I noticed what appeared to be a baby flower bud. Yesterday the bloom opened and I was there to photograph it. 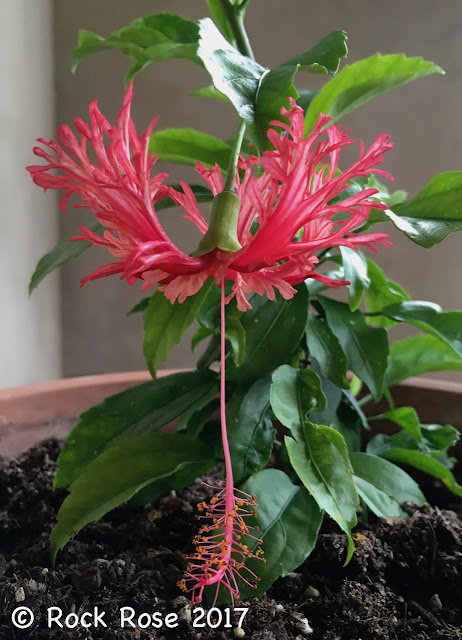 The flower is a member of the hibiscus family, Hibiscus schizopetalus, known more commonly as coral hibiscus, Japanese lantern and native to tropical East Africa. The lacy flowers, which hang from a long pedicet, are deeply pinnately lobed and curve backwards to expose the stamens.
The bloom was short lived and today had fallen off. So glad I caught this beautiful bloom and hope the summer will bring many more.