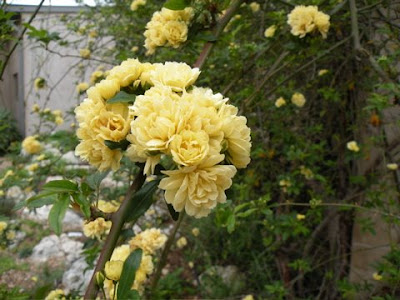 Lady Banks' rose, Rosa banksiae, is one of the most popular roses grown around world. Hardy, thornless and untroubled by the usual rose problems of blackspot and mildew, it is blooming this week, in gardens around Austin, with all its might. This rose is not for the fainthearted. Its arching branches will clamber high up into the trees if given the chance. Not content with a fine performance in my front garden it has spilled over the wall to give the outsider a glimpse of what might be on the other side of the wall. 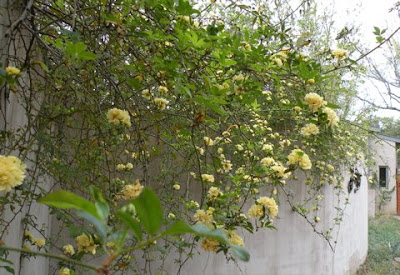 I had never given much thought to the name of the rose. Clearly it was named after someone called Lady Banks. Last year a visitor to our garden asked me if I knew who the lady was. Some discussion ensued and later that week a package arrived containing an article from National Geographic on the life of Sir Joseph Banks. The very wealthy, natural historian, Joseph Banks had sailed three years around the world with Captain Cook, aboard the Endeavour. Returning to London in 1771 he brought back an immense collection of plant and animal material. He died in 1820 at the age of 77. 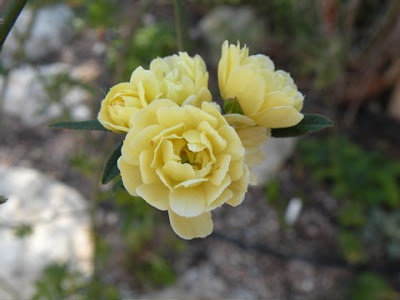 In 1807 one of Banks' collectors had found a rose growing on the Chinese coast and sent it back to Kew where it was named Rosa banksiae in honor of Joseph Banks' wife. It soon became known as Lady Banks' rose.
In 1885 a cutting of this rose was sent to Tombstone, Arizona. In the garden of the Rose Tree Museum grows the worlds largest rose tree. From its twisted trunk grow branches which cover 8,660 sq ft of trellis.
Linnaeus called Banks "the immortal Banks." The legacy of Sir Joseph Banks may live on for ever in many places including the Sonoran desert and many Texas gardens.