Searching through my National Trust book I find a garden that I think is worth a visit. It is the former home of the Terry Chocolate family in the town of York. Following the visit we will take The National Trust walk into the town of York, down chocolate lane.  I have to say that my all time favorite Terry chocolate was the box of All Gold. It came close to Black Magic.  I'm a dark chocolate girl just like my dad. I still love their chocolate orange, though.
But first the house.....

GODDARD'S HOUSE (NT)
The house is in the Arts and Craft style and the gardens to match with many rooms. Noel Terry acquired the four acres of land on which he built the house in 1925. Although the Trust took over the house in 1984 it has been used as their regional headquarters since then and the house has never been open to the public until late July when several rooms are to be opened to the public. There will also be a  cafe which will no doubt serve all manner of chocolaty confections. But for now only the gardens are open for the public to wander. 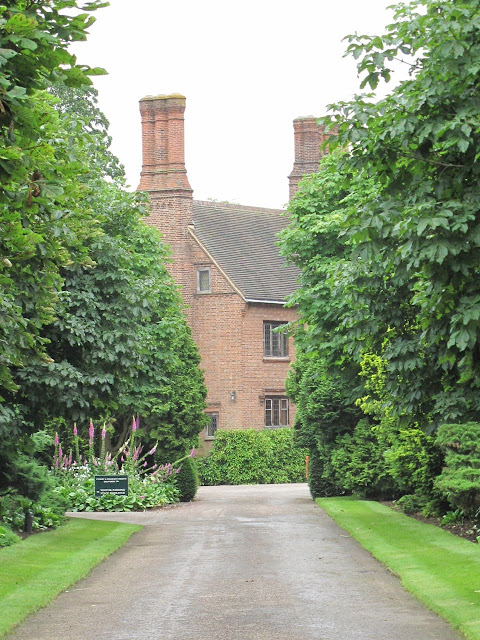 The gardens had probably fallen into some decline until it was decided to open them to the public in 2005. So their restoration is a work in progress. It is easy for me to attest to how quickly a garden falls into a decline as soon as the owner leaves it, even for a period of several weeks. 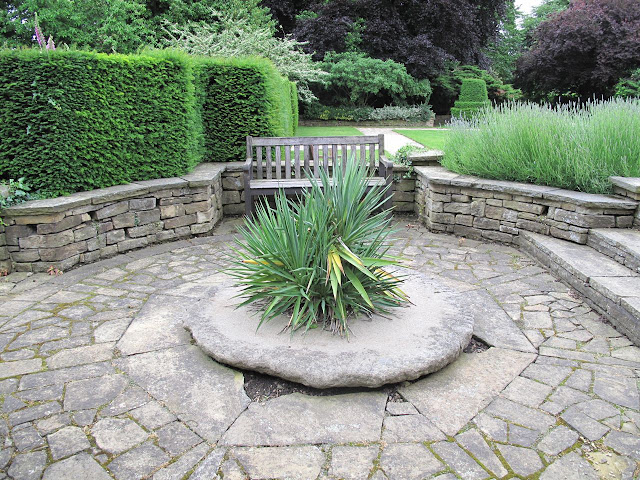 The typical Art and Craft style is similar to those gardens seen at Sissinghurst with several garden rooms. Sunken patio areas with seating. 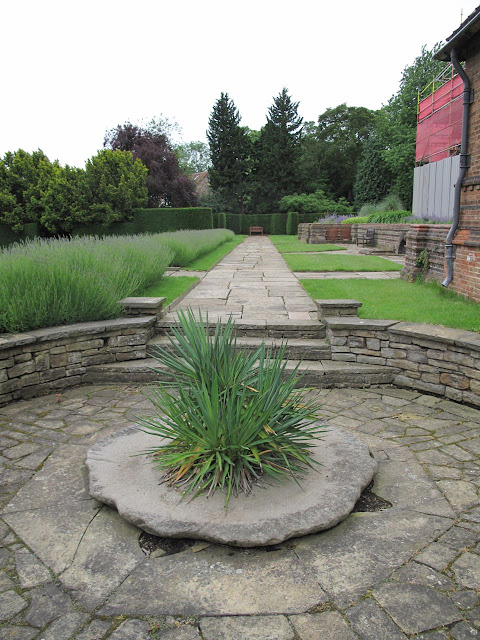 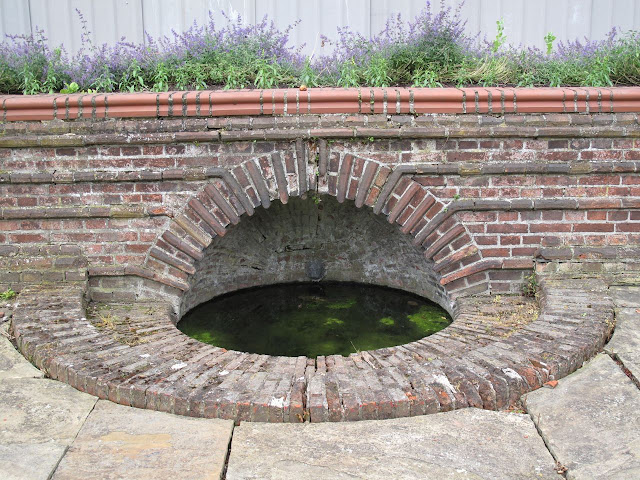 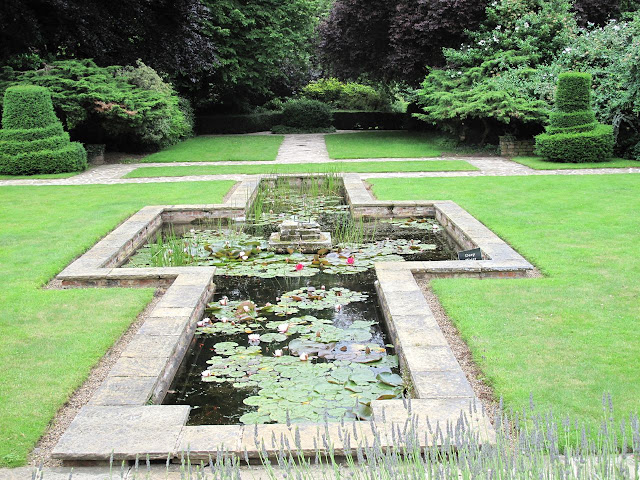 The view from the terrace which runs across the back of the house with lily pond. 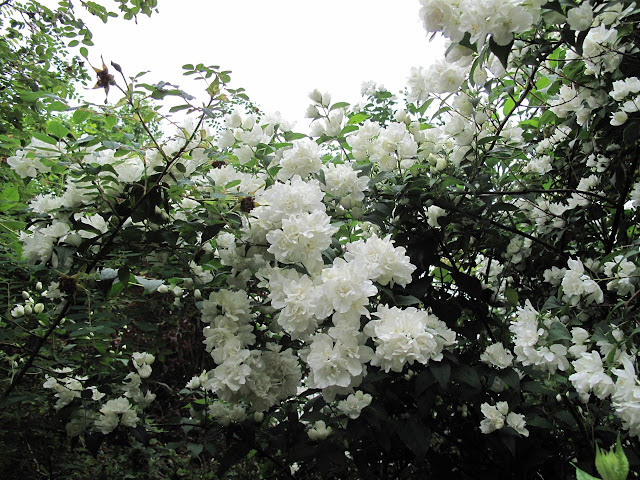 We saw Philadephus flowering in almost every garden we visited. This one a double, with wonderful fragrance. 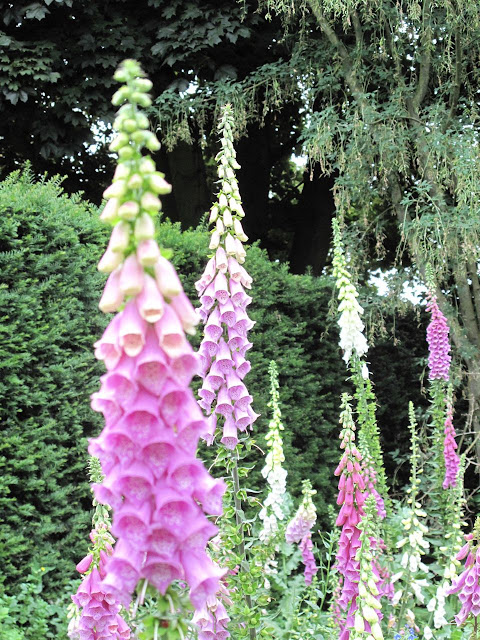 And of course the ubiquitous summer flowering foxglove. 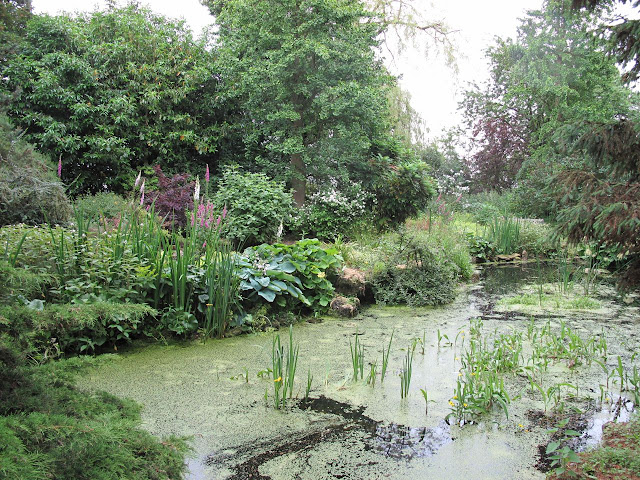 The rock garden and pond at the lower end of the garden still require much work to bring them back to their former glory.
We now set out on the walk to York, across the race course behind the house, passed the chocolate factory and on towards York minster. 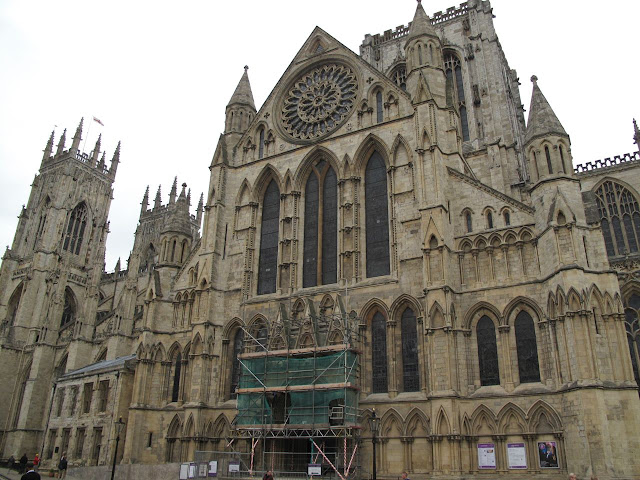 There is always restoration work going on at England's fine historic buildings nad at York they have a stone yard on the site. 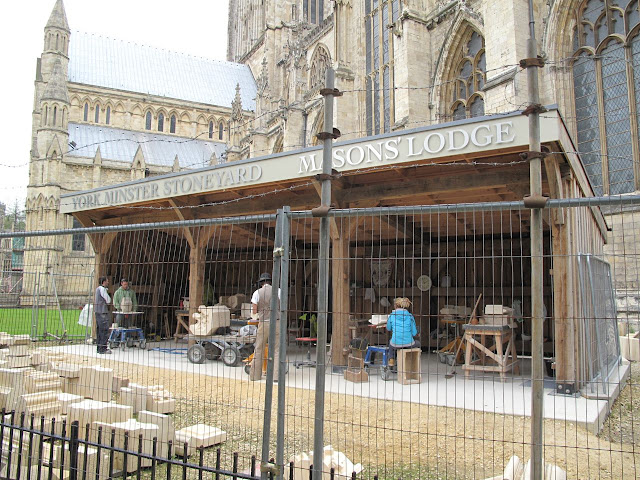 We had one last stop to make in York; Treasurer's House, close by the cathedral. 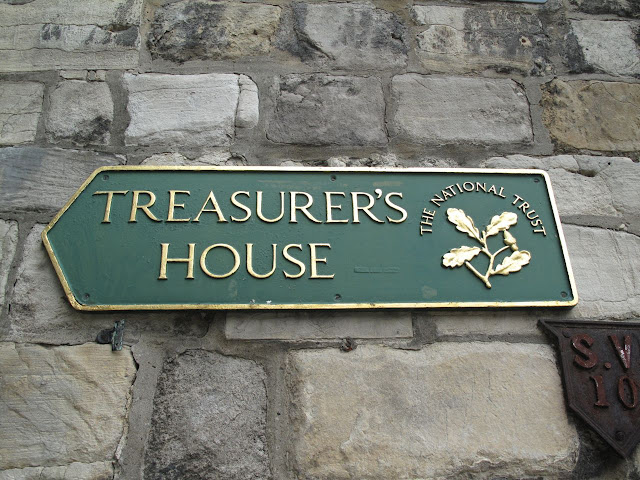 Frank Green gave Treasurer's house to the Trust in 1930 along with his complete collection. The house has a long history going back over 300 years. Originally the home of the treasurer's of York Minster the house bears no resemblance to the original house of the 1500s. 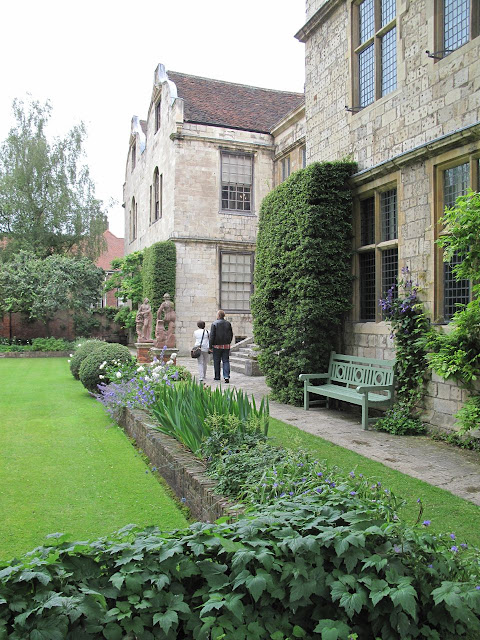 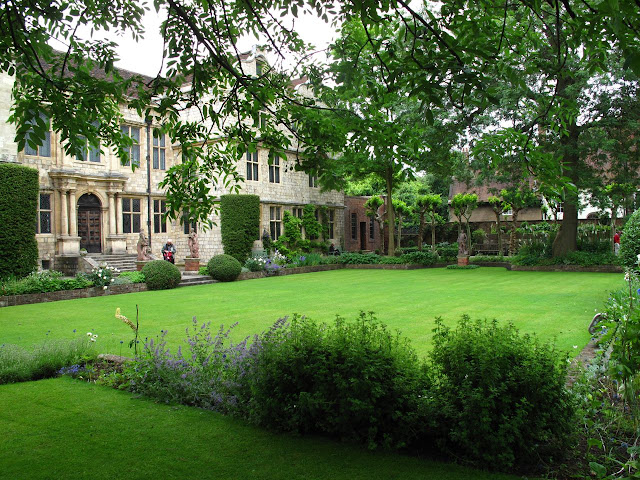 I found myself fascinated by the walls surrounding the house where it seems they used old pieces of other buildings to decorate the walls. 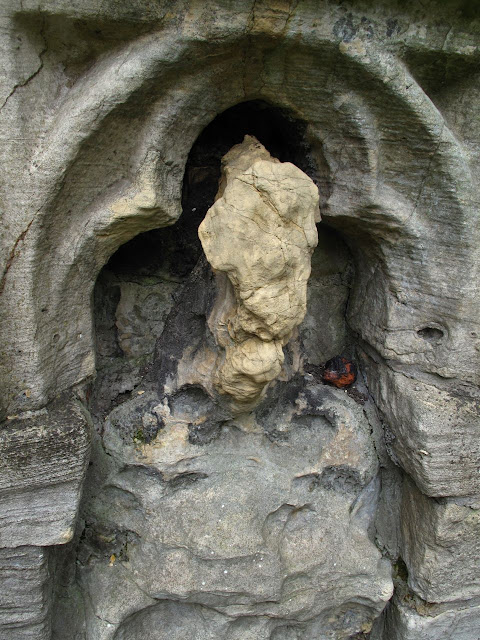 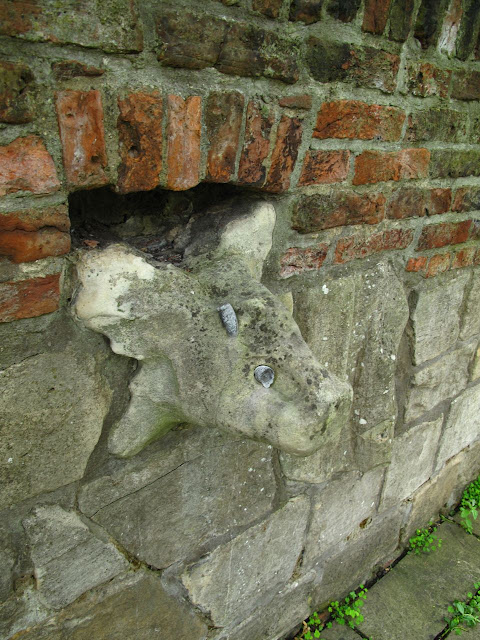 Leaving the house and walking by some more modern stone work. 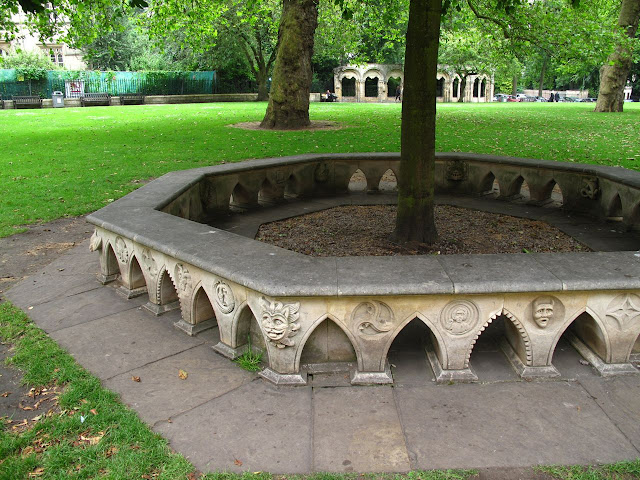 We passed by the Minster once more on our walk back to where we had left our car at Goddard's House. 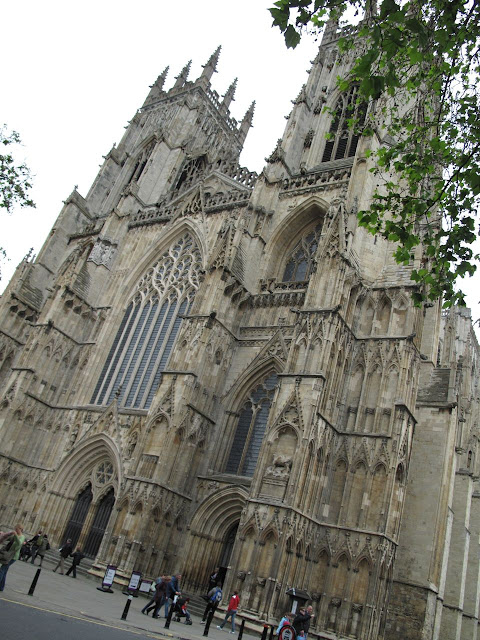 We now had to drive to our B&B north of York, in the village of Crayke. We had already had one rather traumatic incident on our trip and unknown to us we were about to have another. We left York on the A19 which is a two lane road through the countryside. Traveling at speed, suddenly our car came to a screeching halt. There were two other cars ahead of us. We were just wondering why we had come to such a sudden stop wen we saw the reason. A body lying in the road ahead of us. We knew we had to do something to help. The lady in the car in front and I went over to see what we could do. The elderly man in the car who had caused the accident was just sitting in his car in shock. I used the other lady's phone to call the ambulance and they gave me direction on what to do. Unfortunately I knew there was really nothing to be done as the injuries were just horrific. The ambulance arrived in just a few minutes and there was nothing more for us to do. We were able to pull our car across the grass and around the scene. I later learnt the man had died. It was a very sad end to the day.