WE ARE NOT GOING TO WAIT

With only a modest sign of an end to our long, hot, dry summer, it is a surprise to find some of our fall bloomers still blooming more or less on time. The biggest surprise of all is the first-time blooming of my Lycoris aurea, the golden spider lily. 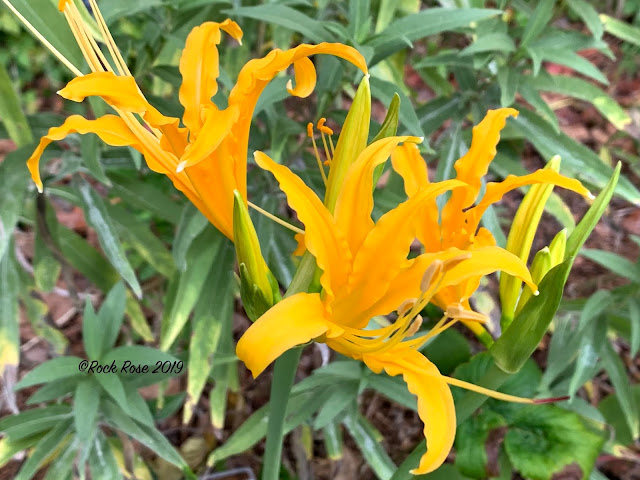 Five years ago I purchased 3 bulbs at an end of season sale.This is the first year that they have bloomed. The Lycoris family seem to be incredibly fickle when it comes to their willingness to bloom. I did a little research and it appears that a period of dry heat encourages blooms. We have had on 1/2" rain in three months and above normal temperatures through September.  It will be interesting to see if other gardeners share this same success this year.
The Lycoris radiata, red spider lily, while more of a consistent bloomer, had seven blooms this year. I think that is a record. 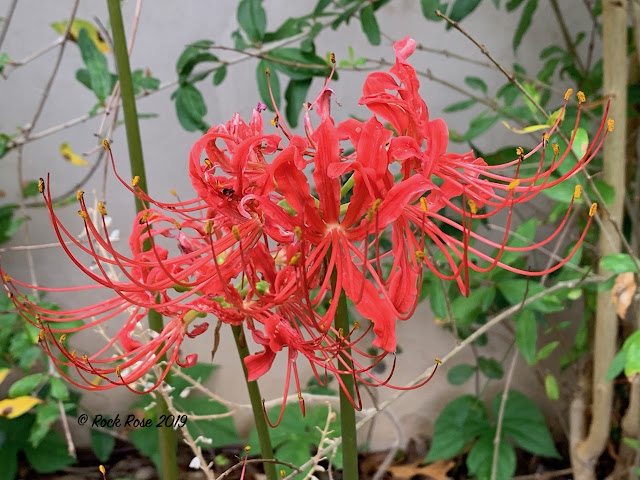 Of course the Oxblood lilies were not going to be left behind. In fact they were the first to bloom after a scant 1/2" rain. There must some other trigger too because they have had some water from irrigation this summer but there was no sign of life until a few days after the rain. Day length and possibly barometric pressure is my guess. g.
Unfortunately daytime highs were still in the triple digits so the blooms didn't last very long. 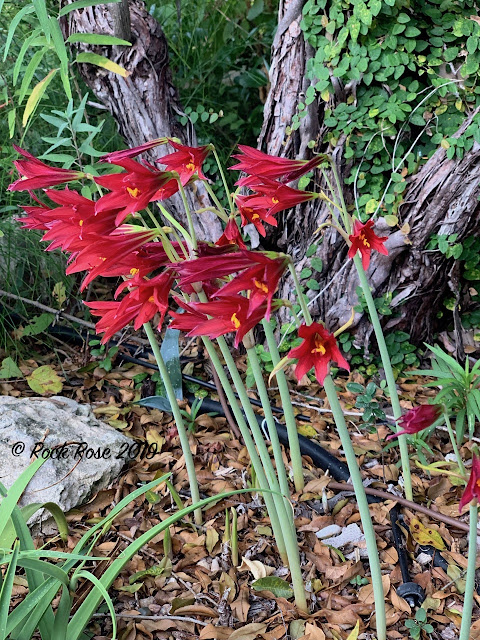 The Philippine violet is one plant that every southern garden should have. After winter dormancy, in which it dies back to the ground, it spends the whole summer putting on several feet of beautiful green growth, and begins flowering in October. The original plant has seeded in several places including at the foot of the dry-stone wall in the English garden. I know it is pointless trying to remove it so I will just let it stay. Flowering on this one is a little ahead of the other ones. 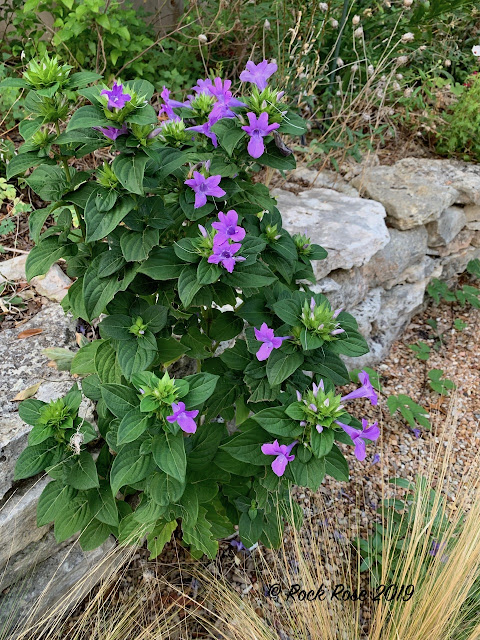 I have two that seeded along the edges of the patio in the sunken garden. They have been growing there for many years, disappearing over winter and returning to bloom in the fall. 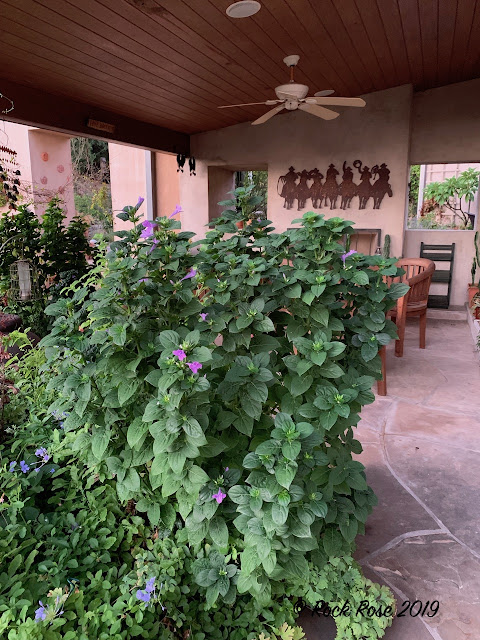 I have had little success trying to move other seedlings although I have one more new seedling which I will try to move over winter.
This morning I watched an anole on the plant licking something from the leaves. I wonder if it was a small amount of water or even some substance exuded from the leaves. 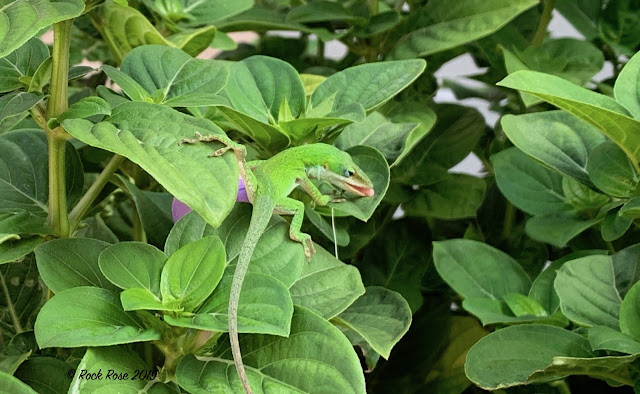 Talking of which...  the amazingly fast growing candlestick plant, Senna alata, began growing in one of my vegetable beds at the beginning of August. It is about to bloom and the ants are busy helping it along. Ants always mean sweet stuff and the nectary glands on the edges of the petals exude sugar which the ants are busy farming. They do the same thing on peony flowers. No harm done in this case except for the fact that the ants are in this bed. 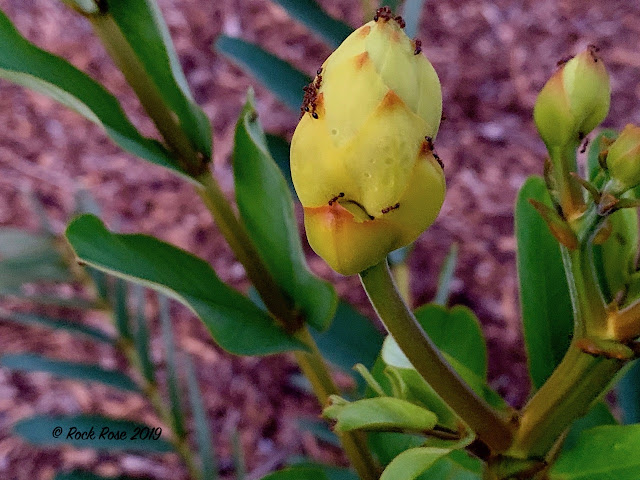 It's time for the Japanese anemones to bloom with their never-quite-perfect flowers. 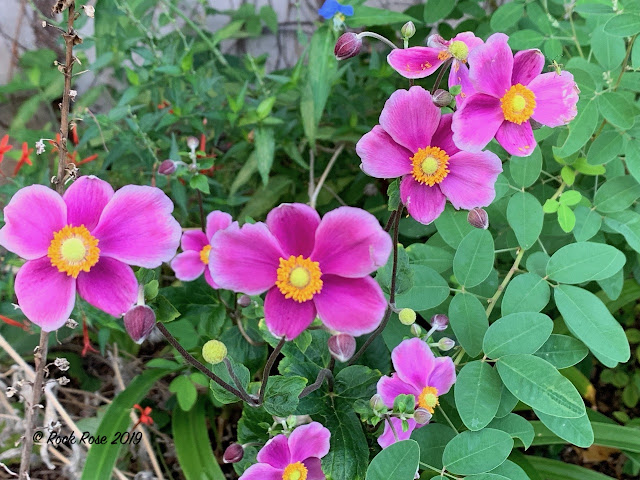 Large arching branches of the bush clover, Lespediza will soon be covered with pretty pea blooms. 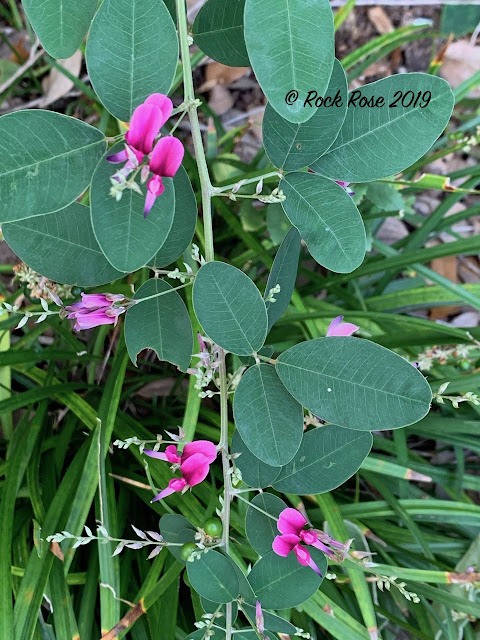 So the fall season is not all lost just as long as we don't go straight into winter. I know some gardeners in the North did so this week.
Posted by Rock rose at 12:04 PM