THE PLUMERIA AND THE SPIDER

I couldn't help myself this morning. Although I am not allowed out into the garden, I happened to catch a glimpse, though the window, of the first plumeria bloom. I had anticipated coming home to the plant being full of flowers and there was not one. Maybe not enough water or maybe it was just taking longer to bloom after the long rootless winter. I stepped out of the door and took a quick photo. 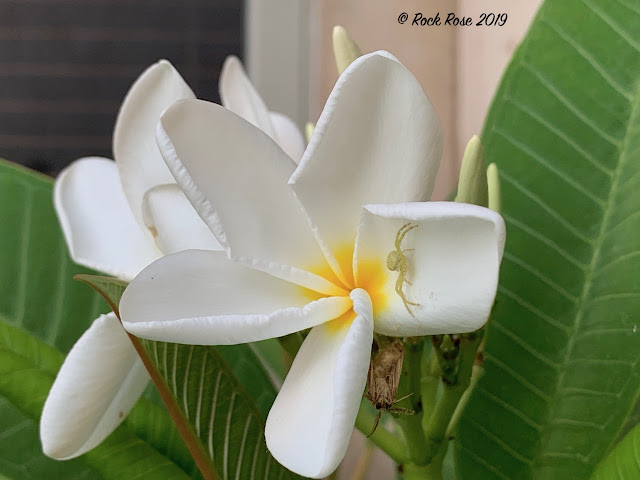 When I enlarged the photo I noticed the little crab spider and a moth dangling down below the flower. I touched the moth but it was firmly attached by a thread. It was then I realized that this was the spider's larder. I have never thought much before about these crab spiders. I see them frequently on the rose flowers when I bend down to smell them, and it never entered my head what they were doing. It seems a little unfair to hang around waiting in ambush for a pollinator to come by but then survival of the fittest long ago determined a continuation of this species of spider. Not being a web spinner it had to find another way of trapping its prey and here was the perfect niche. These spiders are pretty good at camouflaging themselves. As soon as a pollinator comes by they strike with a sting whose venom quickly paralyzes the insect. In this case a night-flying moth was attracted to the plumeria flower, as moonlight lit up those white blooms last night, zap!