HALF AN HOUR IN THE GARDEN

Yes, I am still laid up. How long this is going on for is becoming somewhat irritating. On the other hand it is too hot to spend more that an hour out there, which I did early this morning.
I felt a desperate need to run the hose over the sunken garden which has no irrigation. It is looking quite good considering our long spell of triple digit days and no rain. Even the most drought tolerant of plants can struggle under such conditions.  But the tough flowering native cosmos, Gomphrena 'Fireworks' and 'Strawberry fields' Pride of Barbadosn and the green of the Euphorbia are the best for this season. 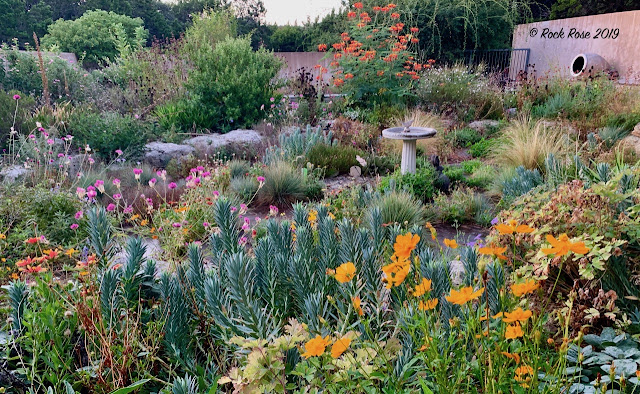 When we had the late frost this spring and the nurseries were caught out and I was lucky enough to be at Lowes when they were having a "frost sale" Honestly, they were giving plants away for 50c and I couldn't resist buying some plants I would never normally buy-the pelargonium for instance. But it has fared well even in the south-facing garden although a mullein has seeded there and is trying to take over. What to do! 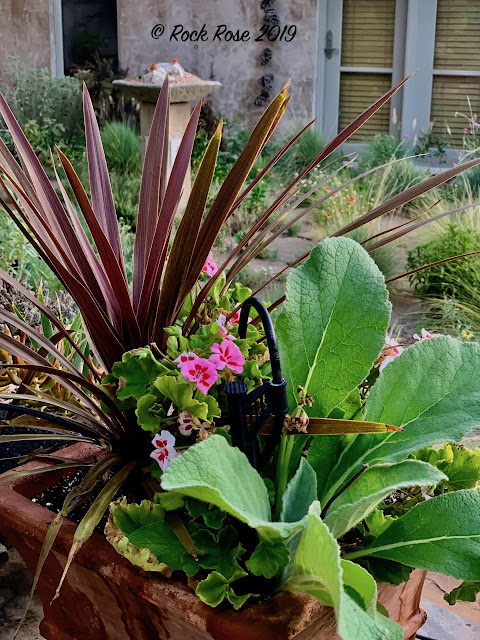 In the herb garden it is the grasses that speak the loudest. 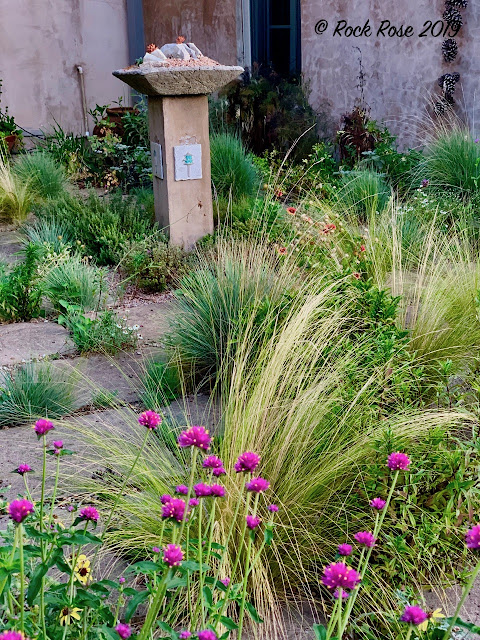 I have moved some of my poly, roughed- up and painted boxes (think of a new word for them) so they get some afternoon shade. 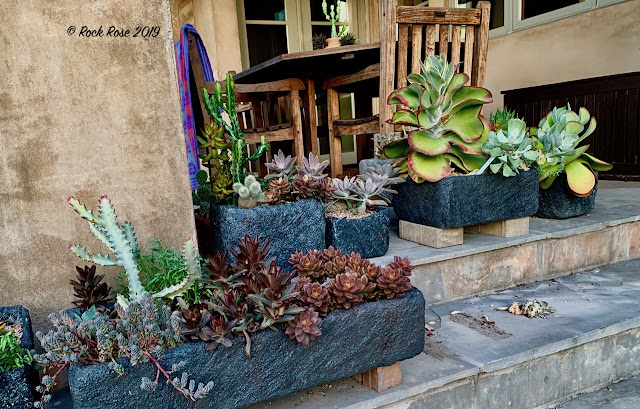 I did the same with the hose in the front garden especially around the grasses which will green up almost instantly when they get water, and was thrilled to find the native poinsettia, Euphorbia cyanthophora,sometimes known as Fire on the Mountain. It would be fun to have both this one and Snow on the Mountain,  Euphorbia marginata,  growing next to each other. Both share the same season of flowering. How easy it is to love some of the Euphorbias and not others. 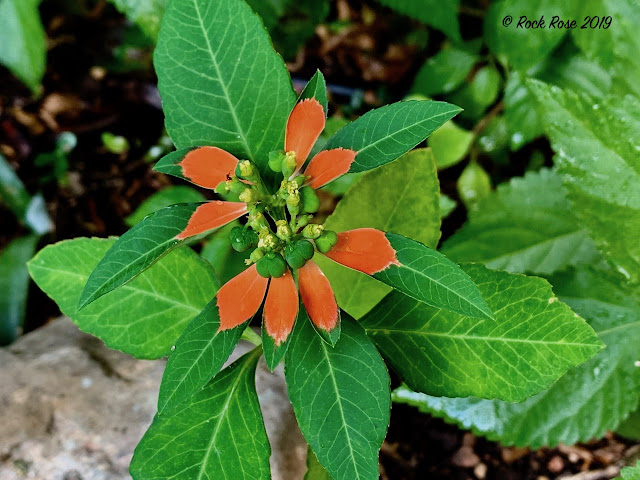 These plants were given to me by my friend, Shirley Fox, who gardens south of here in San Antonio, Rock-oak-deer They were pass-a-longs last year when we had the Fling in Austin. Did they survive or seed here? I am not sure. But, I noticed the other day that she had posted something about hers blooming which made me wander over to the spot where I had planted them. What a lovely surprise.

Always a faithful, fall-is-coming, plant, and right on cue for September, October bloom, is the Velvet leaf senna, Senna lindheimeriana. It is a particularly good plant for the front courtyard as it just pops up in the gravel and always looks good. I probably give it just a little too much freedom but with all that August heat and lack of rain I welcome it. 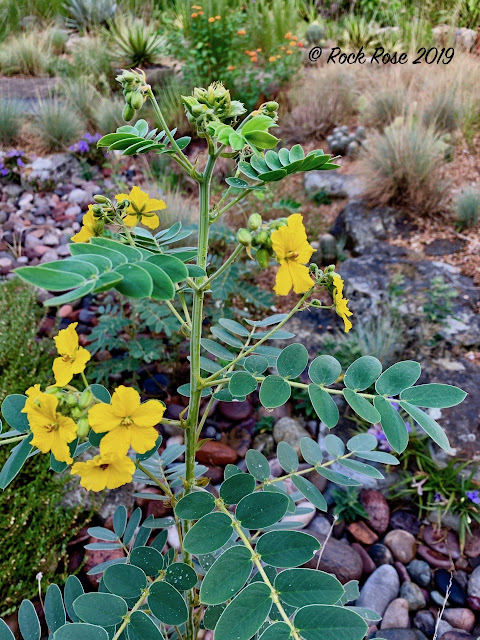 While I was taking the photograph a bee was busy collecting pollen. I'm not positive of his identity so would welcome knowing if he is a wood bee or bumble bee. 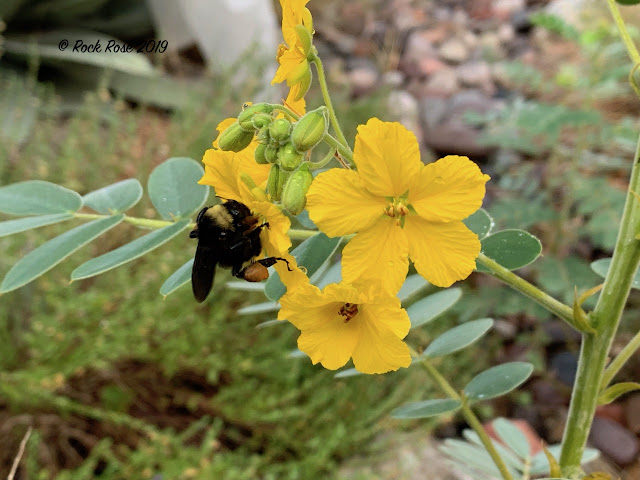 Just look at those pollen sacs. 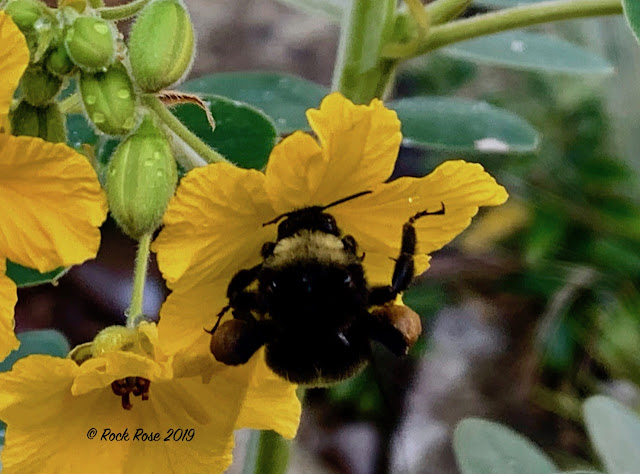 It shows how important it is to have plants flowering even during this heat. These bees need to collect pollen if they and their larvae are to make it through the winter. Ah! Yes. winter.
Posted by Rock rose at 2:39 PM