I took advantage of a recent cloudy morning by going out in the garden with my Cobra head, my scissors, my pruners and the garbage can. Yes, pruning and removal day again. In a rock garden you should be able to appreciate the rocks and the only time you can do this in my sunken garden is in winter and early spring when most perennials are dormant. It is time for a rethink and renewal. 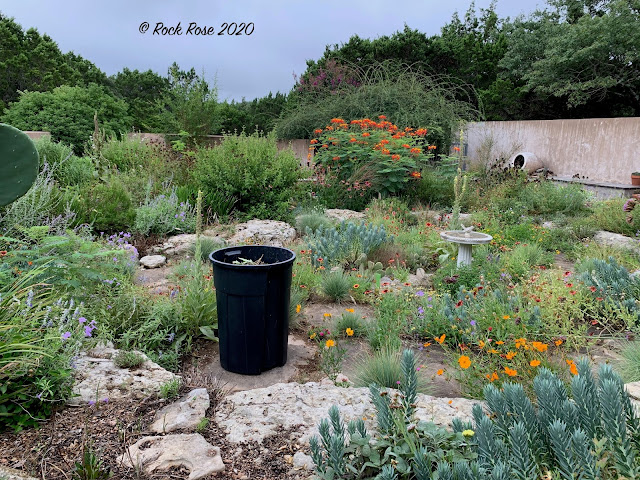 Early summer rains just made everything grow like weeds, and there are plenty of those. Even plants that would be great in another garden setting are no longer welcome. Plants like mealy blue sage, Salvia farinacia, and Ruellia sp. as well as fragrant mist flower, Eupatorium havanense. When this plant made its appearance a few years ago I was more than thrilled but it has pushed out the bee balm. It is now on the move again, almost covering the day lilies and somewhere behind is a yellow iris which only put out a few blooms this year. A big shout out for  something to be done. I am thinking I may just have to remove that mistflower.  I'm almost positive there are rocks under there too.
Mid-June the sunken garden was looking quite nice, although I had at this point already removed the spent annuals like Love-in-a -mist, Nigella damascena, poppies and  other spring annuals. The cone flowers, Echinacea purpurea, were in full swing but by mid July they were finished. Another task on my list unless I want them everywhere. 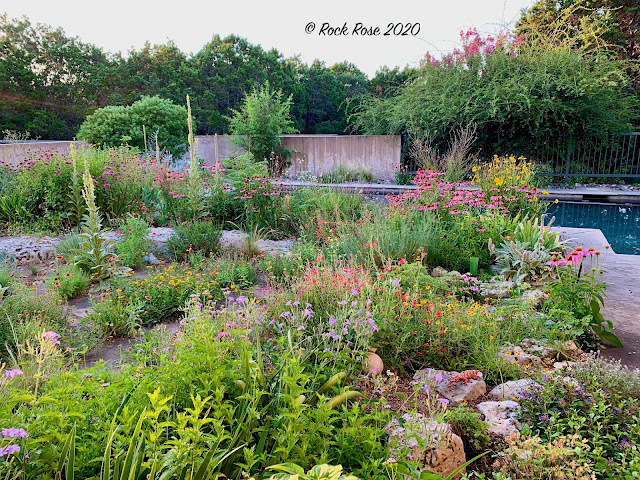 From one angle, on the other side of the wall in the English garden, the late July garden looks fine but I begin to see already that the Pride of Barbados, Caesalpinia pulcherrima, has already attained a size that may demand its removal before next year. Walking around the pool has become more difficult and having had that rather bad accident last year makes me very nervous about walking around there. Maybe a little chop back for now! 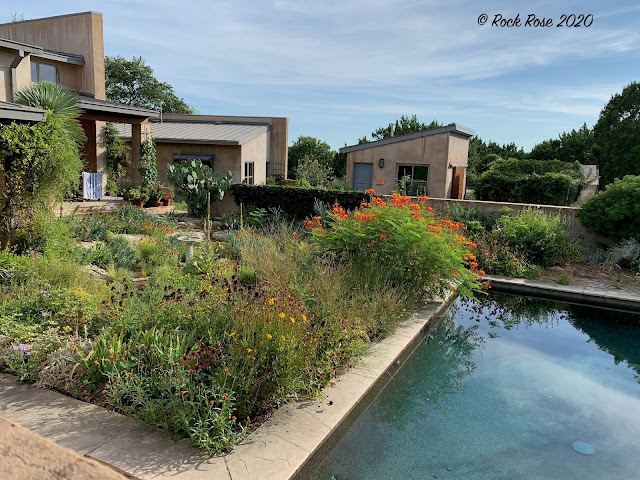 I have already removed all the plants in one area and have a plan to add a few more rocks before I soften the area with small plants. At the same time I will amend the soil which should help its moisture retaining ability. 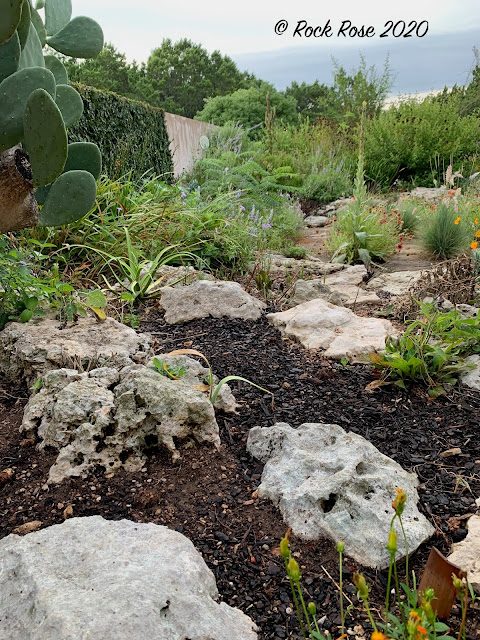 And further along the wall there are Crocosmia sp. which have become  just a floppy mass. How to keep them upright I wonder. Less or more water. I remember my grandparents having these, they called them Monardia, in very sandy soil all the way along their driveway and they were very upstanding.

So I am on the hunt for hardy, small rock garden plants. Unlike English nurseries where the rock gardener would be sure of finding an area dedicated to rock garden plants, our nurseries have no such thing.Yes, they do have cactus and succulents in one area but there are plenty of other plants which could well be classified as being suitable for a rock garden. I guess there aren't enough of us with rock gardens.

When I visited the local nursery in the town in England where I grew up I was left drooling over all the different dianthus they had. I fear I might be a dianthus collector if I lived there. Dianthus do well here-or at least certain ones do and they are a favorite winter annual surviving sometimes for several years. But the selection is always disappointing.

It will be a matter of balancing spring and winter bloomers. For those that are dormant at any time they must look presentable. I may be tempted to add species tulips and their seed heads are quite presentable even until the plant dies back.
Undoubtedly I will add to the list over time but I would like to try to keep the planting in this garden different from the other gardens which is not the easiest thing to do. I am open to suggestions for plants that do well in our Central Texas climate.