A BUCKET A DAY KEEPS THE WILDERNESS AT BAY

I think I would somehow feel cheated if I didn't pull out at least one bucket of vegetation every day. It is what I do best! When I analyze my style of gardening it is to allow plants to grow with wild abandon. Self seeding plants everywhere and plants allowed to remain until even I find it necessary to bid them goodbye. That takes a lot but it does eventually arrive. And every year I look on enviously at my fellow gardeners with their well-managed borders and thriving plants and wish I could do it that way. But I am trying and maybe two buckets a day would get me there. 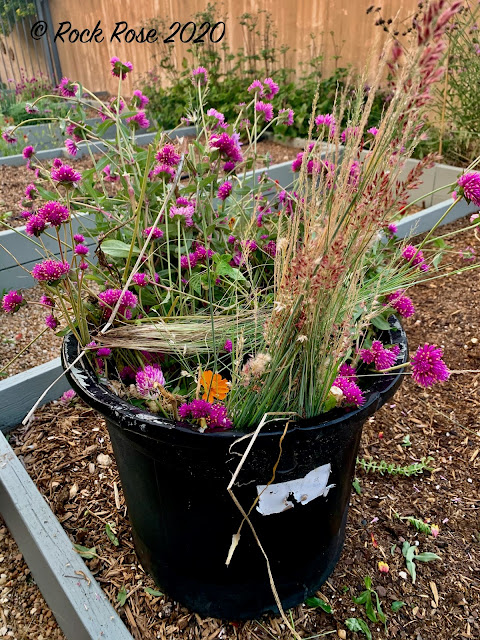 This week I started to pull out Gomphrena 'fireworks' as well as some of the many ruby crystal grasses in the herb garden. I like to have a few plants growing between the pavers but by the end of summer it becomes too many. The Ministry of Silly Walks has nothing on how we get from A to B in this garden. And in every other garden too! While in that area I tackled pulling out one of the clumps of society garlic. It is actually growing in one of the herb beds but unlike the real chives (not garlic chives) it is prolific in its spread. The roots had become so intertwined that in the end I had to use a pick axe and even with that I left a lot of roots behind. A quick text to my new neighbor to see if she would like some and she did. I am more than happy not to have to put them in the garbage can. 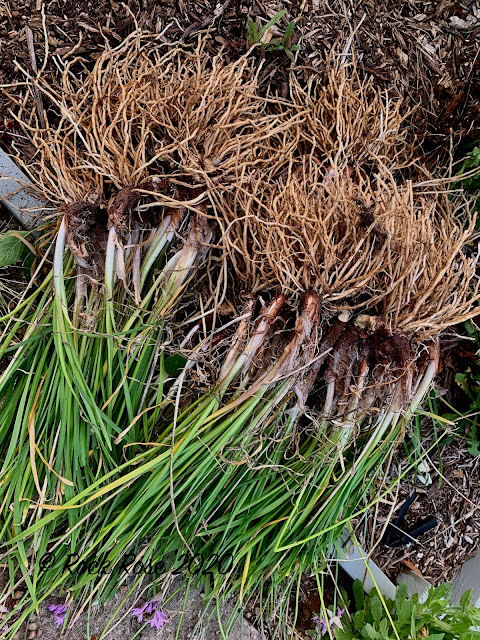 It leaves a nice space to add some new herbs for the winter, like parsley, chives and maybe some dwarf sage-if I can find it and of course some edible flowers like calendula and violas. The one dwarf sage plant, Salvia officinalis minum, I had died this summer. It was so well behaved that I regret its passing. 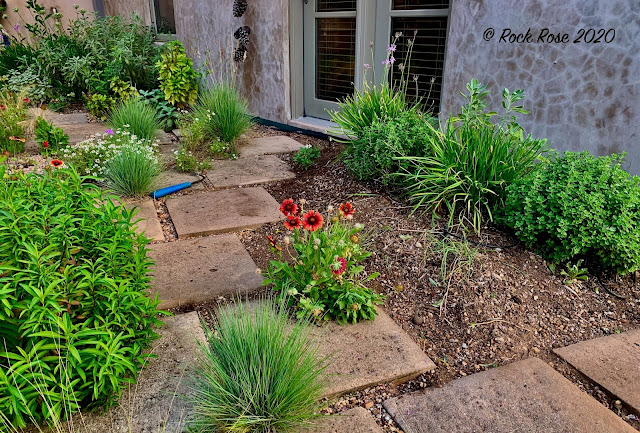 Further along I have removed the purple basil which did not like the rain. Cilantro is beginning to germinate from last years seeds. I had to break a little piece off the seed leaf and roll it in my fingers to smell it. Yes! Cilantro. I did the same with another seedling growing in between the pavers-definitely parsley. 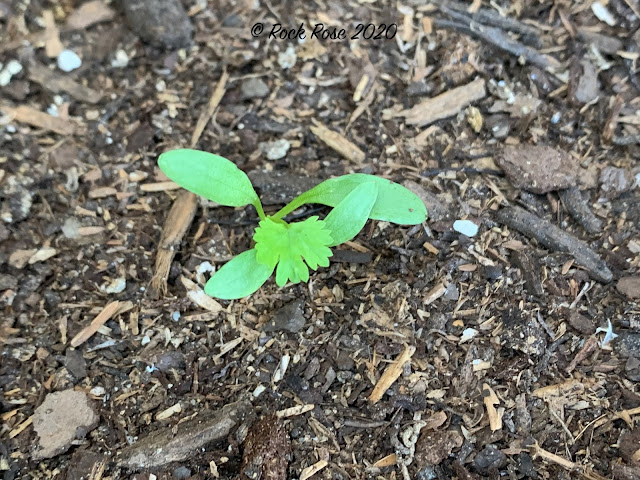 It was a bad year for my various thymes. The lemon and variegated thymes did poorly. Only the culinary one seems to make it from year to year, which is a good thing because I use a lot of both fresha nd dried thyme in cooking. 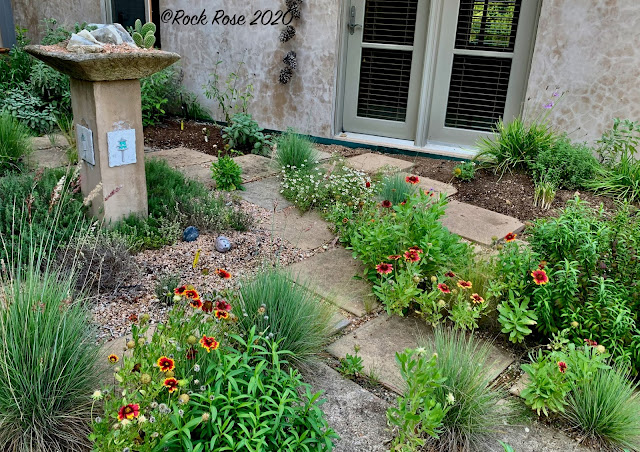 I'm hoping the Mexican mint marigold will flower this year as last year, for the very first time, it failed to flower. I don't see any flower buds yet.

I moved around into the front of the house to tackle a rather large agave that was in the way.  At one time we could walk across the creek and up some steps into the granite area. Delightful when it appeared from beneath the rocks it was now too big and impeding the way. 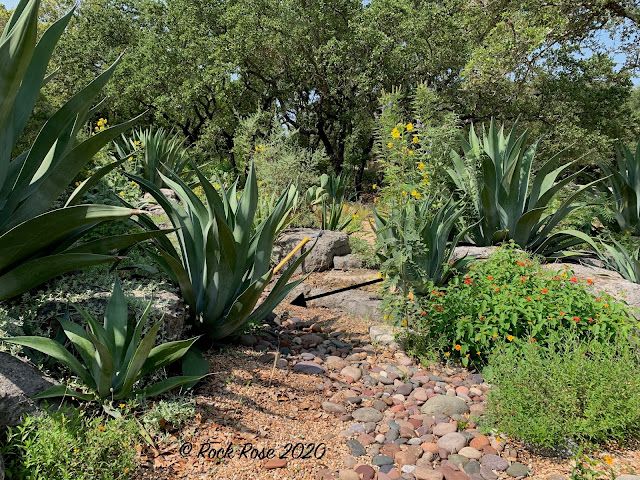 If you have ever had the need to remove an agave then you know the only way to tackle it is to cut off the leaves one by one. I use a serrated knife. I suppose you would call that the easy bit of the job. 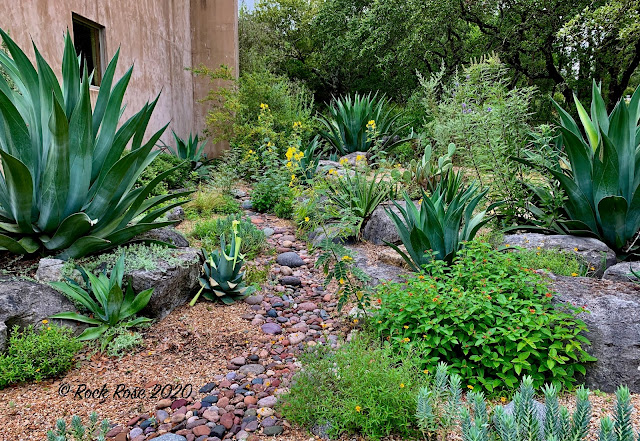 Now to find someone to do the hard bit. David! And even he complained how difficult it was because the plant had come from up above and its root was firmly wedged under the rock. 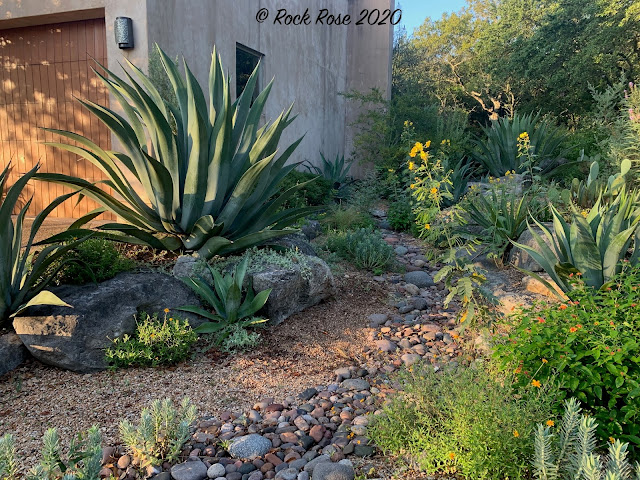 But there is more to be done. This one needs to go too so that once again we can walk up the steps. 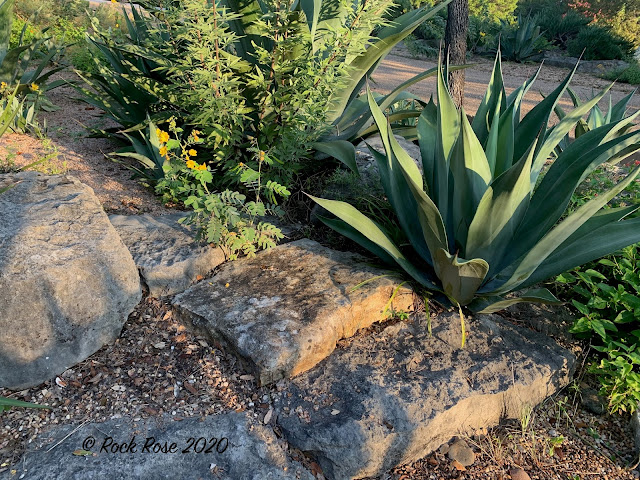 But that will have to wait for another day. The buckets are full.